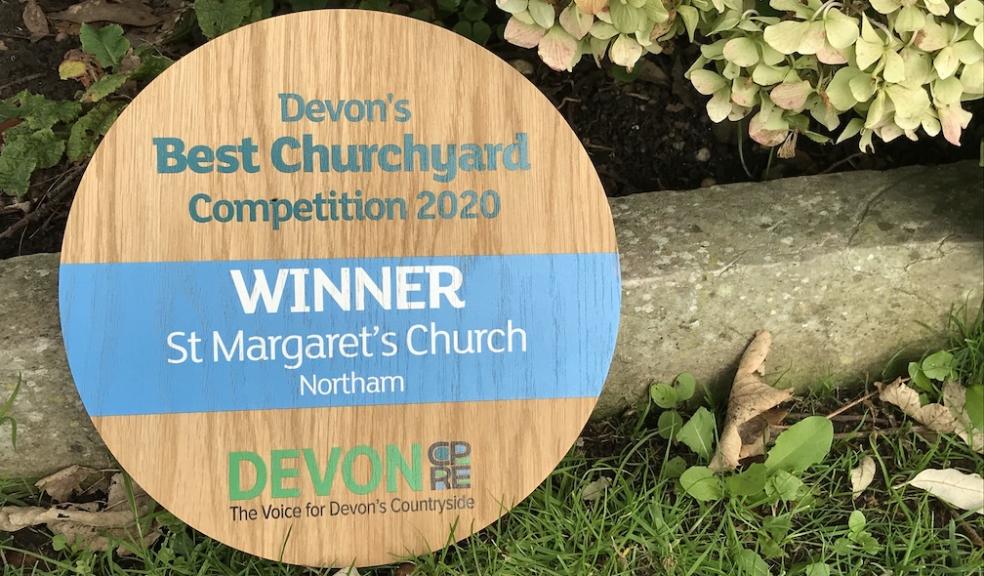 Local countryside and conservation charity Devon CPRE is delighted to announce that St Margaret’s Church at Northam is the Winner of this year’s Devon’s Best Churchyard Competition. At the weekend a sustainable oak plaque and a cheque for £200 was awarded to representatives of the community of volunteers who help maintain this beautifully biodiverse churchyard on the north Devon coast.

Receiving the award on behalf of the team at Northam, churchwarden Cath Ellis said, “We are thrilled to be this year’s winner. We have entered before and received positive feedback, so it’s wonderful that the judges recognised all the hard work we have put into improving our churchyard further still. This green space is particularly special to the people of Northam because we don’t have a park or a village green. Maintaining it has become a real community effort, with church-goers and non-churchgoers committed to making it a peaceful haven.”

St Swithun’s Church at Sandford, near Crediton, came a close second and has been awarded the prize of Runner-up. Volunteer Jean Hope said, “It was an absolute delight and a surprise as we didn’t know the competition was still going on given all the cancellations this year because of the pandemic. We’re thrilled.”

It’s the third year of the competition which celebrates churchyards which are managed to provide a peaceful haven for people and wildlife. Each entry is visited by the judges and assessed on a range of criteria - they are not seeking the most pristine or manicured churchyards, but those which encourage biodiversity and offer something special to the local community.

Because of the Covid-19 pandemic, this year’s competition had to be run differently to previous years. The judges waited until after Lockdown travel restrictions were lifted in the summer to begin their on-site inspections. There was no official prize-giving ceremony this year but the Winner and Runner-up have both been presented with their trophies in person, in informal visits observing strict social distancing restrictions.

The judges said it was a difficult task to pick a winner as all the entries were doing such a great job of making their churchyards appealing places for people and wildlife.

Devon CPRE’s Director Penny Mills, one of two judges, said: “Our 2020 competition has been an unusual one for the volunteers who look after the churchyards and for us, as we had to postpone judging until we were allowed to travel after Lockdown. Then we had to make all our visits travelling the length and breadth of Devon in two cars, socially distanced, even eating our sandwiches at lunchtime. Ironically, we’d brought the competition forward this year to try to see the churchyards in their full glory of spring flowers, but the pandemic put paid to that!  But we said we'd complete the competition by the autumn and we have!”

Penny added, “We've seen some amazing places from tiny rural churchyards to larger urban ones and visited villages we'd never been to before. We’ve seen first-hand how well communities take care of all these special places and how they encourage wildlife with lots of different ideas. This year two of the churchyards have community allotments, and one has specimen trees labelled with QR codes - we've never seen that before in a churchyard.  We even went to a green burial woodland, which isn't a churchyard at all!”

Fellow judge, Devon CPRE Trustee Ivan Buxton, commented: “The churchyards are all different, but every competition has to have a winner and we judge what we see on the day we visit. It was good to see that some of them had taken on board our comments from previous years and had acted on them: lots of bird boxes, bug hotels, new gates and signage.  I am sure some will be disappointed this year that they haven't won a prize. That’s why we’ve decided to award a Certificate of Merit to all the entrants who weren’t placed in the final four and didn’t win one of our prestigious oak plaques.”

Penny and Ivan are already looking forward to seeing what will be done to make Devon’s churchyards biodiverse sanctuaries in 2021. In fact, they’ve already received an email from a church that didn’t enter this year asking about next year’s competition. Word is spreading and the standard is noticeably rising year on year.