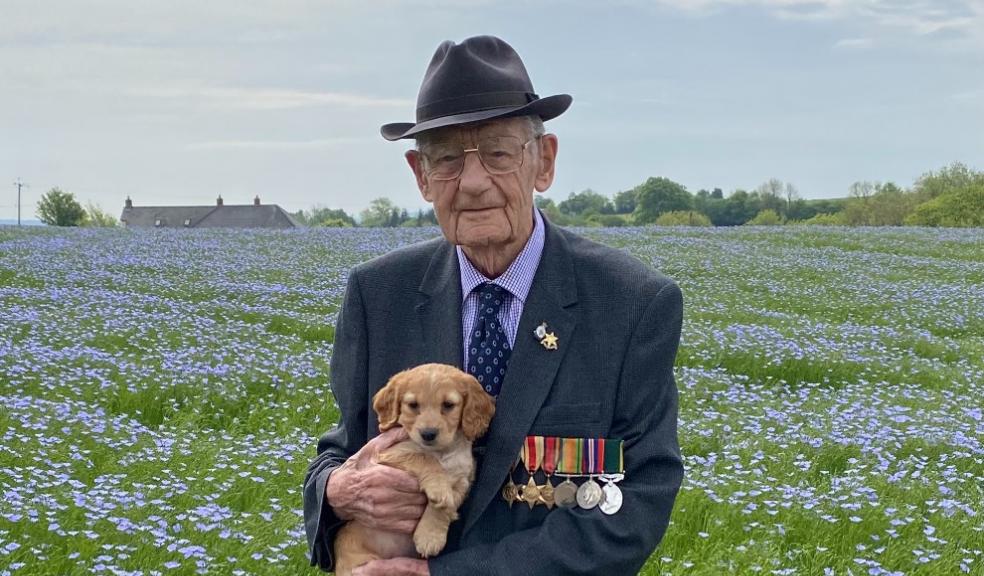 100 Year old Burrington resident Gordon Short and his family have been regular supporters of Devon Air Ambulance (DAA) over the years and have been personally affected by the life-saving service. Family members have organised numerous charity golf days, donated diamond wedding anniversary gifts and most recently gave £1000 in celebration of Gordon’s 100th birthday, now this amazing centenarian is undertaking a brand new fundraising challenge set by his son Graham...

Born in 1921, Gordon was diagnosed with polio in his younger years and suffered paralysis below the neck until he was 8 years old when he regained control of his limbs and learned to walk. During childhood he also suffered septicaemia and double pneumonia. Despite this he gained a full education and was later considered A1 ‘fighting fit’ when it came to enrolling in the army in 1939, aged 18. During his 7 years serving in the army (WW2) Gordon survived a bombing on his transit through the Mediterranean, as well as advances through unforgiving jungles and crossing a minefield found on the way to Rangoon, after battle of Kohima (Burma) - he is one of a handful of over 100 year old active Burma Star Veterans.

By the end of the war Gordon was a Captain of the British Army (he would probably have made Major but got demoted because he took the Colonels girlfriend out on a date and the Colonel found out!)

Outside of wartime service, Gordon is a real philanthropist and has dedicated his life to serving his local community. With 30 years in his local parish council, 13 years as county councillor, 33 years of service as secretary, chairman, vice chair to the British Association of Seed and Agricultural Merchants, plus many years spent serving various other committees, such as Devon County Show his community work has been an integral part of his adult life.

This need to support his community was inherited from his father who, when he and his fellow WW1 comrades began to miss the brotherhood they once shared, donated a section of his land and arranged for an Army Hut to be erected there. This hut became a club house for ex-servicemen, who came to play skittles and have enjoyed an anniversary dinner there every single year since 1923 (98 years - except the years it was being repaired).  This Comrades Club then merged with the local village hall, which is still actively used and today boasts a skittle hall and billiard room.

Gordon inherited, built upon and has passed on to his sons, the family business: which is a Seed and Agriculture business, trading seed, fertiliser and other agricultural products such as clothing: https://www.pickards.co.uk/countryside-pursuits and now boasts 100 years of a full life under his belt. He was the loving husband of Joyce, father of John, Graham and Nigel, Grandfather to 6 and Great-Grandfather to 5.

It is Gordon’s son Graham who has challenged his 100 year old dad to this incredible feat which is to play 5 ends of Bowls, at 20 different clubs across Devon. (5x20=100 to recognise Gordon’s 100 years), in support of Devon Air Ambulance.

Currently a member of the South Molton Bowling Club, Gordon’s interest in bowls was also inherited, and he has passed his love for the game on to his children which has now become a family hobby. Gordon was elected President of Devon Bowling Assoc in 1993, and has played across the world in Australia, New Zealand and South Africa as well as Portugal, Spain, the United States and Canada.

So, challenge duly accepted, Gordon’s first game will take place on July 20th at the Plymouth Hoe Bowling Club, where Sir Francis Drake was informed of the invasion of the Spanish Amada, he didn’t let that stop his game, let’s hope nothing stops Gordon from his!

Gordon will be chaperoned on his journey across Devon for the 4 weeks following and aims to play his final 5 ends at Torrington Bowls Club on 19th August.

Devon Air Ambulance are very grateful to the Short family for their ongoing commitment to help keep their specialist medical crews responding throughout our beautiful county and beyond.

Sally Hilton, Head of Fundraising at DAA told us:  “We are very thankful to Gordon and the Short family for their wonderful support of the charity. It’s clear that Gordon has had a huge impact on community life in the area that he lives and so this fundraiser, that will see him visit many of the communities we serve, is very fitting and illustrates that we are ready to respond to those who are critically ill and injured across the county.”

If you would like to help celebrate the life and achievements of this incredible Burrington Bowler and help him on his fundraising quest, you can do so by donating to his Just Giving page here: https://www.justgiving.com/fundraising/Gordon-Short100