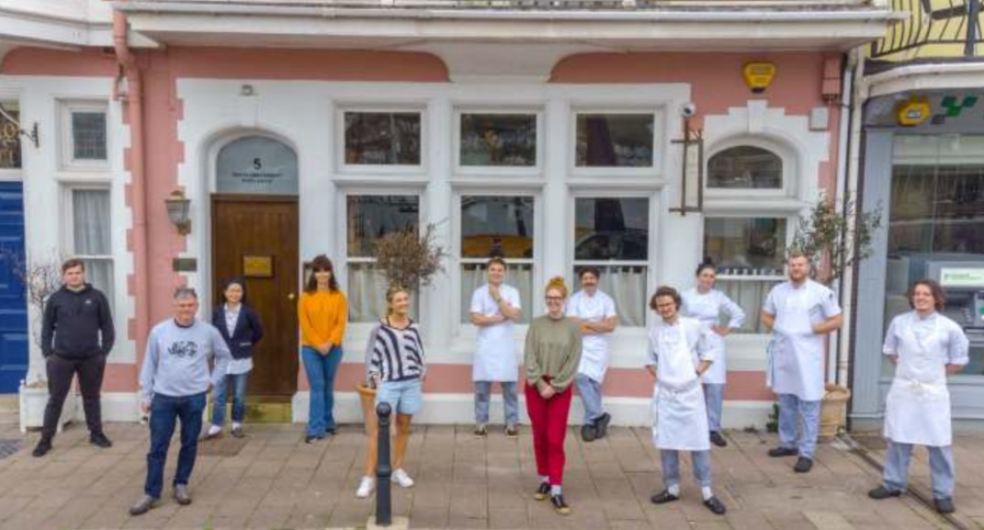 Dartmouth’s Seahorse restaurant scooped the highest placing for a Devon restaurant in this year’s National Restaurant awards and was one of only two restaurants listed from the county.

The Seahorse restaurant, number 52 in this year’s UK top 100, has made the list more than 10 times in the past, regularly placing it as the highest ranked restaurant in Devon.

This is testament to the strength of the team at the helm, head chef Jake Bridgwood and general manager Bronte Story, who have taken over the running of the restaurant and pushed standards to new highs.

The famed dining room was forced to close last year following a serious flood and was rebuilt retaining the original features and furniture and the addition of a new terrazzo floor. Over the years the restaurant has grown with the addition of Joe’s Bar, which now has al fresco seating on the Embankment and The Cantina where guests can enjoy private dining whilst being cooked for by Mitch’s son Ben.

The Estrella Damm National Restaurant Awards has an elite and authoritative judging academy, using a panel of over 200 experts drawn from across the industry including food writers, chefs and restaurateurs.

The UK is split into 11 regions, with members of the academy voting for the top seven restaurants that they have dined at in the last 12 months, weighted in order of preference. The results are compiled, and the top 100 list of the best restaurants is created.

Mitch said, “It is a real honour to be thought of so highly and included in such a prestigious list. Head chef Jake Bridgwood and general manager Bronte Story have built and nurtured a fabulous team who all share the passion and belief and love of great food and good hospitality that is fundamental to the success of a restaurant and the loyalty of our guests.”

The judges said:” Step through Joe’s Bar, named after one of The Seahorse’s first guests and friend of owner Mitch Tonks, and you’ll enter the bright and convivial dining room that has been a welcome staple of Dartmouth’s eating out scene since 2008.

The Seahorse is the embodiment of Tonks, a man whose love of food and hospitality knows no bounds. A keen fisherman, passionate food lover (as well as the brandy) and impeccable host, Tonks has established a restaurant that is beloved of people in the West Country and beyond.

The Seahorse’s website talks about the team having a sense of excitement and anticipation every day that it opens the restaurant, and this is palpable when you pay a visit to the buzzy dining room that is flanked by a vast mustard banquette. Here’s you’ll typically find groups of people tucking into a second or even third bottle of wine as the infectious ambience of the room takes over.

The restaurant’s menu is underpinned by a love of Italian food but also of fresh fish, of which the restaurant takes two deliveries each day from nearby Brixham fish market, and a passion for grilling over flame. Dishes are often simply prepared to let the freshness of the ingredients shine through, with waiters proudly showing off the day’s catch to diners to help them with their choice.

At The Seahorse a service begins with the staff toasting each other with the day’s aperitivo – a tradition that shows that hospitality starts at home and with the staff. It’s an approach that has kept the quayside restaurant on the top of its game for almost a decade and a half. We’ll drink to that