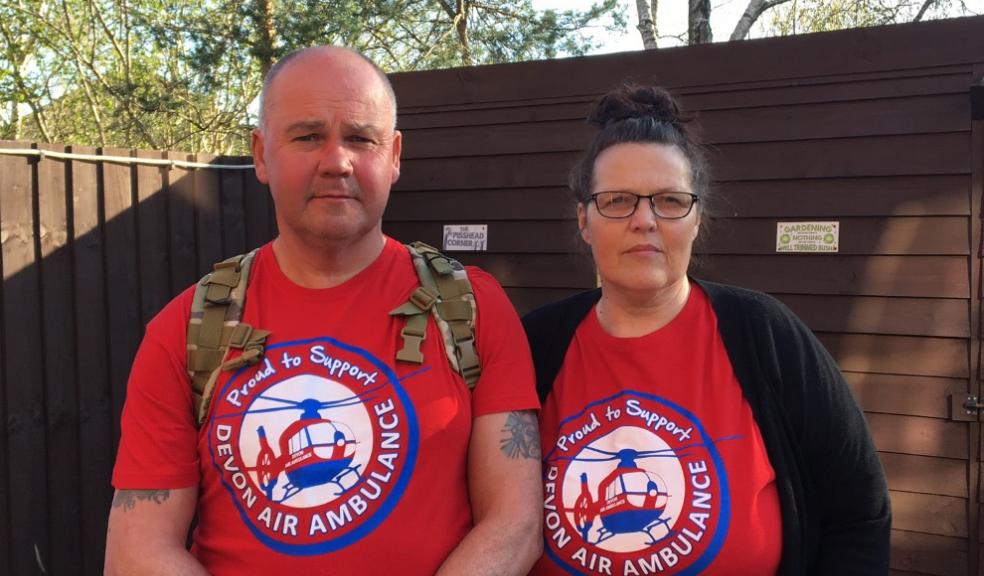 A freak road traffic incident on the morning of 23rd January 2020 in Heathfield, Newton Abbot changed the life of Karen Barber in an instant.

Now, over a year after the tragic accident, Karen’s partner Steve is taking on his own challenge to raise vital funds for Devon Air Ambulance.

The rapid response of the Devon Air Ambulance crew saved Karen’s life after a quick stop at the local shop one morning left her collapsed at the scene. As Karen was about to get back into her car, a lorry came alongside to turn right, but the driver misjudged the space and hit Karen, trapping her between the car door and the side of the lorry. Her lasting memory is how difficult it was to breathe as she crumpled to the floor, the lorry driver unaware of the collision.

Karen’s son, 14-year old Charlie, was also at the scene soon after the accident - he was heading for the bus to school. He couldn’t believe his eyes when he realised what had happened to his mum.

Devon’s Air Ambulance critical care paramedics quickly joined land ambulance paramedics at the scene and immediately recognised that Karen had suffered life-threatening internal injuries that would need emergency surgery. The aircrew decided it would be safer to transport Karen to the Major Trauma Centre at Derriford Hospital in Plymouth by road as there was a huge possibility that Karen could deteriorate further and could possibly require life-saving interventions before reaching the hospital; this would be best carried out in the back of a land ambulance as more space would have been required. Devon Air Ambulance paramedics accompanied Karen on her journey to hospital to be able to monitor her ongoing condition.

Karen’s partner Steve, told us: “I am setting off on this walk from Heathfield, where the accident happened, to Derriford hospital in Plymouth where Karen underwent a 9 hour operation following the accident. I want to raise as much money as I can for Devon Air Ambulance as I am convinced they saved her life. I will be setting off on the 30 mile route which will take me across Dartmoor – it’s approximately 11 hours walking non-stop plus, I will also be carrying 20 kg in weight.

I was medically discharged from the army after an accident and suffer myself from PTSD, if anyone else has been in this position I would ask them to please dig deep and find the strength to help the next person that might need the help of such an important charity here in Devon.”

Head of Fundraising at Devon Air Ambulance, Sally Hilton praised Steve & Karen for their support: “Karen suffered terrible injuries during the incident and a year on she is still undergoing regular check ups and weekly physiotherapy sessions as well as trips to the gym to build up her strength. It’s wonderful that Steve is now taking on a challenge of his own to support us and it’s a pleasure to be able to stay in touch with Karen as she continues her journey to a full recovery. We’re wishing Steve all the very best for his walk”.

Steve's walk is taking place on Saturday 1st May and he has set up a fundraising page here: http://bit.ly/StevesWalkToDerriford  If you can donate, it will surely boost his morale and spur him on in his efforts!

You can read more about Karen's story on the Devon Air Ambulance website here:https://www.daat.org/blog/it-all-changed-in-an-instant