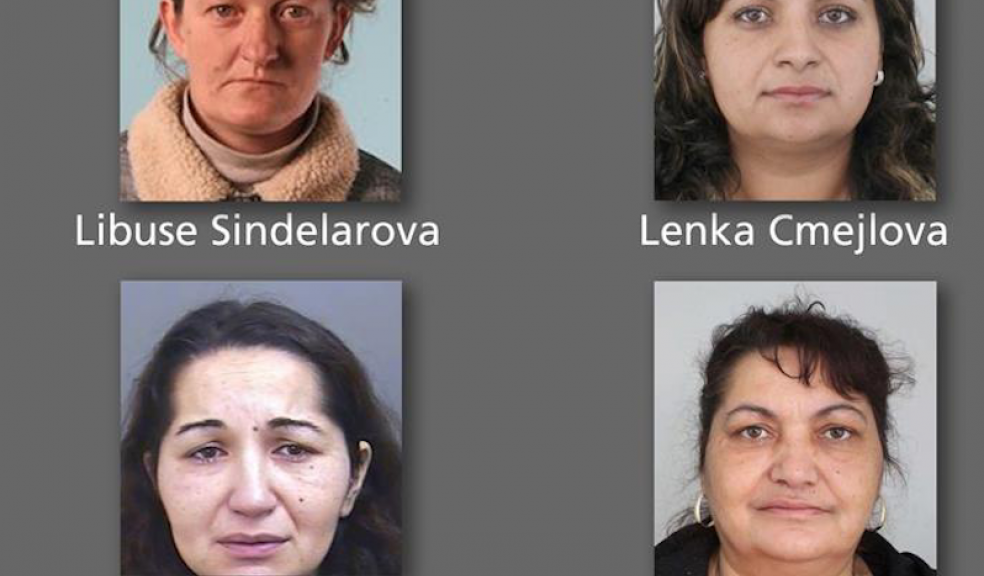 Four Czech nationals who tried to derail a human trafficking trial by forcing a victim to retract his testimony have been jailed for a total of more than 20 years today [11 September].

The four targeted Josef Bukovinsky who had given evidence against Katerina Ruzena Tancosova herself and four members of her extended family – Martin Tancos, Katerina Kurejova, Nela Dzurkova and Petr Tancos – when they were on trial in Plymouth in 2015 for their part in an organised modern slavery operation.

The five had trafficked vulnerable Czech nationals into the UK for the purposes of labour exploitation and for their own financial benefit. Their victims were forced to work long hours for the equivalent of pocket money to pay off imaginary debts, kept in very poor living conditions and threatened with violence to keep them in line.

Seven men had been freed from Plymouth addresses in 2014 kept by the five family members following the largest operation of its kind by Devon and Cornwall Police and partner agencies.

Bringing the five to justice was a lengthy process. The defendants appeared before two crown court trials, the first of which was halted due to issues with court processes and the second which collapsed due to the witness intimidation of Mr Bukovinsky.

They were eventually jailed for a total of 20 years and six months in October 2016 after a third trial; it was the first prosecution for human trafficking offences in Devon and Cornwall.

The witness intimidation came after Mr Bukovinsky, one of their victims, returned home to the Czech Republic after giving evidence in the second trial in June 2015.

He was tracked down by Tancosova, the ‘matriarch of the operation’, Cmejlova and Sindelarova and made to withdraw his evidence by writing a letter under duress to the trial judge in Plymouth to say that his testimony was false and that he was under the influence of various drugs at the time. Sindelarova took the victim to a solicitor to witness the letter being written. The second trial ongoing in Plymouth against the extended family members collapsed as a result.

When police officers from Plymouth went to the Czech Republic in July 2015 to ask him about his letter he could not be located as he was being held captive at a property occupied by members of the Tancos family.

Sindelarova was found and told Plymouth officers that she had met Bukovinsky at a supermarket in the Czech Republic [pictured] and he had confessed that he had lied at a UK trial and felt guilty. She claimed she had helped him out by taking him to the solicitor's office [also pictured]

Officers travelled to the Czech Republic again in September 2015 and eventually found Mr Bukovinsky as he had managed to escape from the house. He described how members of the Tancos family, including Ruzena Tancosova, had approached him in a car and asked him whether he wanted to ‘rectify’ what he done.  He said he was afraid and was taken to the house where he was kept out of sight for three months, made to work, and forced to change his statement, being accompanied to the solicitor by Sindelarova to ensure he complied.

He was forced to set up a Facebook account which was taken over by the family and his retraction was also posted on a public page for Katerina Tancosova, who was on trial in the UK, to see.

Ruzena Tancosova also targeted a second witness and persuaded him not to attend court to give evidence. She and Katerina Ruzena Tancosova already jailed for six years and six months for modern slavery offences in the previous trial in 2016, both pleaded guilty to a second charge of perverting the course of justice.

Detective Inspector Nick West, from the Serious and Organised Crime Branch, welcomed the sentences, adding: “This was a concerted effort by this four to derail the trial and interfere with the English justice system, as well as re-targeting a victim who had been brave enough to come forward and give evidence. We were never going to accept that.

“The investigation team worked tirelessly to put the first five defendants on trial in 2015 and would not allow this prosecution to fail. They travelled twice to the Czech Republic, determined to learn the truth about what had happened to Mr Bukovinsky and to ensure that he was safe.

“I would like to praise the investigation team which was tenacious in its efforts to make sure these traffickers did not get away with their crimes. The investigation and subsequent prosecutions have disrupted a well-organised and callous family gang who promised vulnerable victims a better life but instead subjected them to appalling, oppressive and subhuman conditions.

“This latest chapter in this long-running and complex case sends a strong message from the police and the CPS that modern slavery will not be tolerated in Devon and Cornwall and whatever tricks are played, we will make sure offenders face justice.”

Members of the investigation team were awarded with commendations from the judge for the exemplary work in the 2016 trial. The investigation is now used as best practice by police forces nationally.

Ann Hampshire, Senior Crown Prosecutor for CPS South West, said: “The actions of Tancosova, Cmejlova, Sindelarova and Tancosova saw one witness pressured into not attending to give evidence and a second witness pressured into claiming his evidence was false, leading to the collapse of a trial and allowing criminals to evade justice for a year-and-a-half.

“This had a significant impact on the victims and witnesses. The failed and subsequent trial wasted almost £1 million, being counsel fees, defence costs and additional police costs. This was an unusual case but the evidence presented by the CPS and gathered by the police both in the UK, the Czech Republic and the USA established a very strong case which resulted in the four defendants pleading guilty to the offences.

“This investigation and subsequent convictions was only possible due to the international cooperation of law enforcement agencies in Europe and elsewhere, both in the gathering of evidence, securing the attendance of witnesses and in the subsequent arrests and extradition from the Czech Republic of these four defendants.”