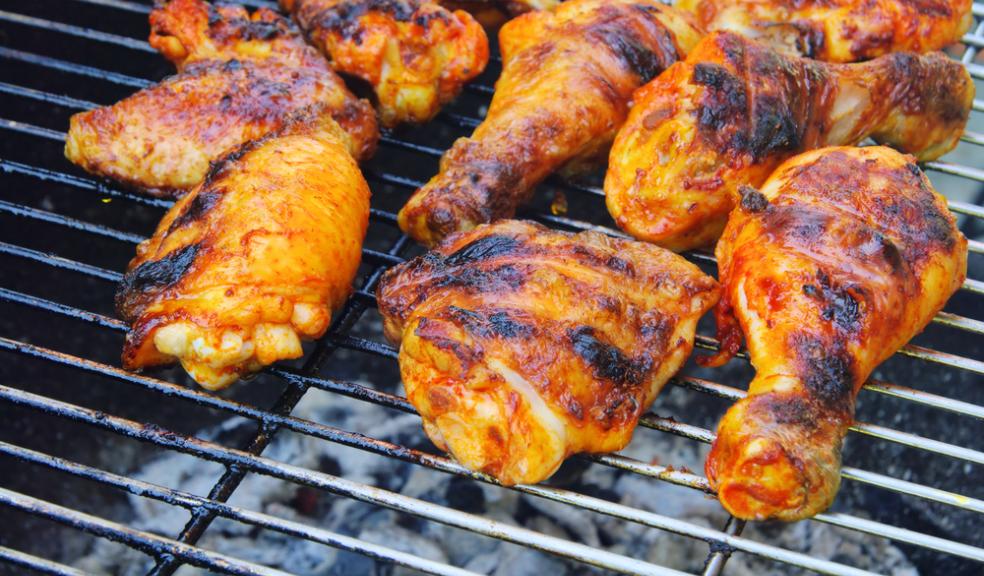 As the school summer holidays get into full swing, a survey has found that the humble chicken is likely to be in high demand on barbecues in the South West. Bangers and burgers have lost out as 29% of people in the South West named chicken as their top pick .

Encouragingly, 29% of people in the South West said they take extra care when cooking chicken on the barbecue. However 22% said they never worry about it, despite the fact that over a quarter of a million people fall ill every year due to campylobacter, the bug most often carried on raw poultry.

The poll by the Food Standards Agency (FSA) aims to promote the Chicken Challenge – the FSA’s campaign to encourage everyone to do their bit to reduce the number of people who get food poisoning from chicken every year.

Between July and September, there is an approximate 50%  increase in cases of campylobacter poisoning. As bacteria grow fastest in warm temperatures, the FSA is asking the public to remind themselves of the little things they can do to keep their families safe.

Kevin Hargin, Head of Foodborne Disease at the Food Standards Agency, commented: “We all want to serve up a sensational barbecue that also helps keep our family and friends safe. Although it’s great to be spontaneous, it’s safer and easier on the day if you prepare in advance by following simple measures such as pre-cooking chicken in the oven before putting it on the barbeque to ensure it’s cooked through, not washing raw chicken and avoiding cross-contamination of raw meats.”

Consumers can help avoid the build-up of food poisoning bugs by taking the following simple steps:

1. Pre-cook - it’s a very good idea to cook all chicken in the oven prior to giving it a final ‘finish’ on your barbecue where possible. Your friends and family will still experience that special barbecue ‘charred’ taste – and you will know that you’ve cooked the chicken all the way through. This technique can also be used for sausages, burgers and kebabs if you’re cooking for large numbers, as you’ll want to avoid providing undercooked food.

2. Charred doesn’t mean cooked - cook your barbecue food thoroughly until you are sure that your poultry, pork, burgers, sausages and kebabs are steaming hot, with no pink meat inside. Turning meat regularly and moving it around the barbecue will help to cook it evenly. Charred on the outside doesn’t always mean cooked on the inside so it’s always safer to cut open and check your burgers, sausages and chicken. If in doubt – keep cooking.

3. Remember, disposable BBQs take longer to heat up and to cook food - always check that your meat is cooked right through before serving.

4. Avoid cross-contamination by storing raw meat separately before cooking - use different utensils, plates and chopping boards for raw and cooked food. Always wash your hands thoroughly with soap and hot water and dry them before handling your food for the barbecue and after handling raw foods including meat, fish, eggs and vegetables.

5. Don’t wash raw chicken or other meat - cooking will kill any bacteria present, including campylobacter. Washing chicken, or other meat, can spread dangerous bugs on to your hands, clothes, utensils and worktops by splashing.

6. Keep plates and cutlery away from raw meat and fish - never serve your guests cooked food on a plate or surface that’s had raw meat or fish on it, and don’t use cutlery or marinades that have been in contact with raw meat. There’s no point in serving up food with a flourish if you’re adding bugs back into the mix.

7. Keep cold foods below 8°C and hot foods above 63°C - don’t leave food that you would store refrigerated standing around in the warm. You can get a cool bag for this purpose. Keep the number of times the bag is opened to a minimum until the food is eaten.

8. Cook marinades thoroughly if you intend to use them as a glaze or sauce

9. If you’re preparing rice beforehand, ensure it is fully cooked - cool and refrigerate it within one-hour of cooking and make sure it is consumed within 24-hours

To pledge to do your bit to support the Chicken Challenge, go to www.food.gov.uk/chickenchallenge