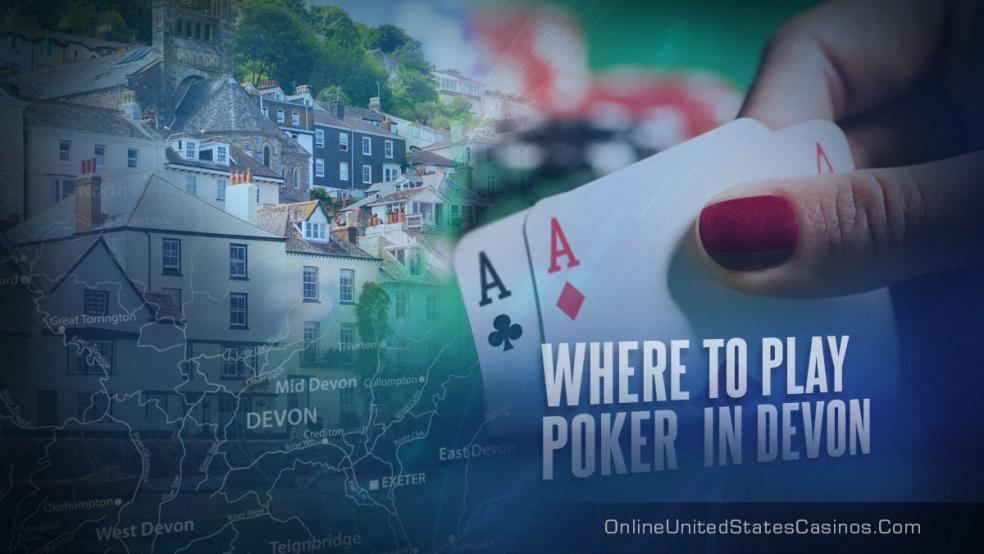 Following its inception in the 19th century, poker quickly rose to become the world’s most popular card game, a favorite in all corners of the globe. According to many, it hit its apex between 2003 and 2006. A period often referred to as the poker boom. However, despite most laypeople’s perception, the game did not go into hiding post-2006 and has still maintained a sizeable following and popularity.

In late 2020, American regulatory bodies posted record-breaking online poker revenues. In October of that year, New Jersey pulled in a record of $93 million from online poker and casinos, an increase of 106.7% compared to the same month in 2019. UK’s Flutter Entertainment also announced a 17% annual growth in poker revenues for 2020. Thus, the game is back in style, with interest in it peaking like never before since the mid-2000s.

If you are in the mood to enjoy a little card action, there are a few venues that you can visit in Devon. Sadly, the offer is not quite as robust as some would hope. However, playing on the internet is a viable alternative. Many suggested online poker sites offer cash games and tournaments, enriched with promotional offers unavailable at land-based venues. Nevertheless, if you have decided to visit a physical establishment to seek out card thrills, here are the best locales to travel to in Devon.

Opened in 2012 on 2 Union Street, Genting Casino is a small but modern gambling facility. Its usual working hours are from 1 PM to 5 AM, and it enforces a casual dress-code. Genting’s Plymouth gaming floor boasts nineteen terminals and eight tables. The latter consists of three American Roulette tables, two blackjack ones, a baccarat table, and four casino-poker games.

If you plan on coming here exclusively to play poker, then know that tournaments occur every day except Wednesdays and Thursdays, with cash games often running alongside them that feature a free rake for the first hour. The Genting Casino Plymouth also hosts poker leagues. If you get hungry when at a table, you can step to the property’s Late Bar. It offers a food menu and a full bar with a decent selection of spirits and non-alcoholic beverages.

As you likely know, Grosvenor is one of the largest casino chains in the UK, with 53 venues spread across the island.  The Rank Group owns the brand, and it also operates locales across Spain and Belgium. Their Plymouth spot is a stylish one, located on the Derry’s Cross Roundabout. It hosts twenty slot machines and twelve table games, including Punto Banco and French Roulette.

The casino has two poker tables that are active every day, except Tuesdays and Wednesdays. Their working hours change during the weekend. The game on offer is No-Limit Texas Hold ‘em, and you can catch regular tournaments here. Dining-wise, your only option is the Grosvenor Plymouth Restaurant, which serves a variety of different cuisines. It is most famous for its Silton topped 8oz Rump Steak and burgers. The venue also has a lounge area where you can take in live sporting events on giant screens.

The fate of Genting’s stop in Torquay remains unknown. The Malaysian company announced plans for closure in June of 2020, but many speculate that it may reopen once UK’s leisure sector gets back on track. That said, it used to be one of the premium card destinations in Devon county. It featured five tables that offered Omaha and Texas Hold ‘em poker. Cash games and poker tournaments ran five nights a week, with buy-ins that ranged from free-roll to £46. On the first Sunday of every month, the casino would host a tournament with a prize pool of £5,000 (entry fee of £57).

Poker aside, Genting’s casino in Torquay also features ten table games and twenty electronic machines with a minimum return-to-player of 94%. It boasted a Fahrenheit restaurant and a Late Bar. While things currently look bleak, GMB union officials are hopeful that Genting may resume operations sometime soon in the Devon seaside town. It would be a shame to lose this poker hot-spot forever.

Unfortunately, the live poker offer in Devon is scarce. The port city of Plymouth offers the two best options in the county. The Grosvenor Casino and Genting Casino. Nevertheless, if you are not averse to technology, you can find cash games and tournaments on online platforms that suit your bankroll. Gambling sites feature far more diversity in all departments while enjoying the convenience of playing from anywhere at any time. Plus, you can get treated to welcome bonuses and take part in loyalty schemes that offer sizeable rakeback, the kind you won’t find at physical establishments.

Shelly Schiff has been working in the gambling industry since 2009, mainly on the digital side of things, employed by OnlineUnitedStatesCasinos.com. However, over her eleven-year career, Shelly has provided content for many other top interactive gaming websites. She knows all there is to know about slots and has in-depth knowledge of the most popular table games. Her golden retriever Garry occupies most of her leisure time. Though, when she can, she loves reading Jim Thompson-like crime novels.