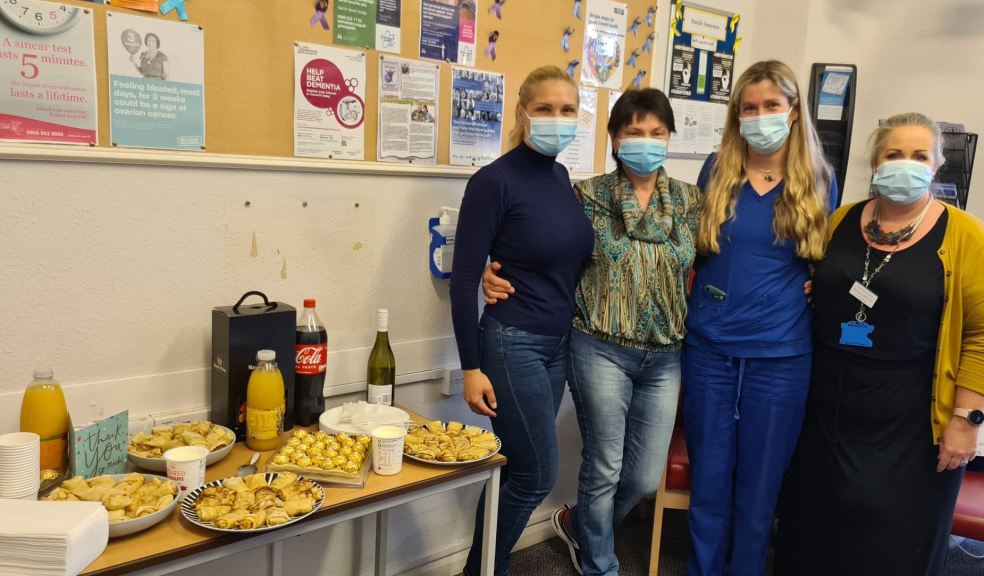 Staff at a GP practice in Torquay are among hundreds of people in Devon, Plymouth and Torbay who have been moved by the war in Ukraine to offer accommodation to people who are escaping the conflict.

The team at Brunel Medical Practice have made a flat, which is owned by partners, available to a mother and daughter Liudmyla and Nataliia, who have moved to Devon from Kiev with their dog and four cats

The team are among hundreds of sponsors from across Devon, Plymouth and Torbay who, according to the latest available figures  have applied to become hosts for 1772 people under the Homes for Ukraine scheme.  This is in addition to the many people who have helped family members to the safety of the UK.

1628 visas have been approved under the scheme for people coming to Devon, Plymouth and Torbay. 1138 of them have arrived so far.

This national Refugee week, which runs from 20th June, is particularly poignant for Brunel Medical practice staff and the many other local people, who have or are about to welcome people into their homes.

Practice Manager Rachael Lankshear said: “The whole team was moved to action by the harrowing pictures we were seeing on the news.  The partners agreed to offer up an empty flat they owned and the team came together to decorate and furnish it.  This was a way of us showing support for Ukraine in a personal way at such a difficult time.”

Liudmyla, a retired nurse, and hairdresser Nataliia arrived in Torquay in May and recently showed their appreciation for practice staff by cooking them lunch, including blinis; a favourite food from home. They said “We are so very grateful for the wonderful, kind and generous support that Brunel Medical Practice have given us.

“They have helped to make an incredibly difficult time easy to bear and deal with, and for this we are eternally thankful and will never forget what they have done for us.  We feel so lucky and so happy to be here in beautiful Torquay, and so safe!”

While people fleeing the current conflict in Ukraine is new to Devon, the area has been supporting refugees from many different countries for many years.

Recently approximately 100 people were hosted in temporary accommodation through the Afghan resettlement scheme, for people and their families who had supported British forces in Afghanistan.

Exmouth GP Dr Barry Coakley worked closely with Afghan refugees on their arrival and said: “The people we were caring for had helped to keep our British forces safe and we welcomed the opportunity to support them in return.  We needed to explain how the NHS works, such as what a prescription is and how to use it to get medication.

“Having left in a hurry many people hadn’t brought medication and had only verbal accounts of their medical histories. We needed to think differently when treating them; for instance a headache might have been caused because they had left their glasses behind and were experiencing eye strain. We also needed to ensure they had good mental health support.”

Work supporting people from Afghanistan and previously Syria has ensured that local authorities, charities and health services were already working in partnership and able to offer appropriate health support to people escaping the war in Ukraine.

Posters in Ukrainian and Russian from Doctors of the World explain how the NHS works and how to access services.

People arriving from Ukraine do not need to prove their ID or address in order to register with a GP.  They will automatically be assigned an NHS number through the visa process and should be offered a GP appointment soon after registering to assess their immediate health needs.

People are also able to have any Covid vaccinations they are eligible following their arrival and do not need to wait for their NHS number nor to prove their identity.