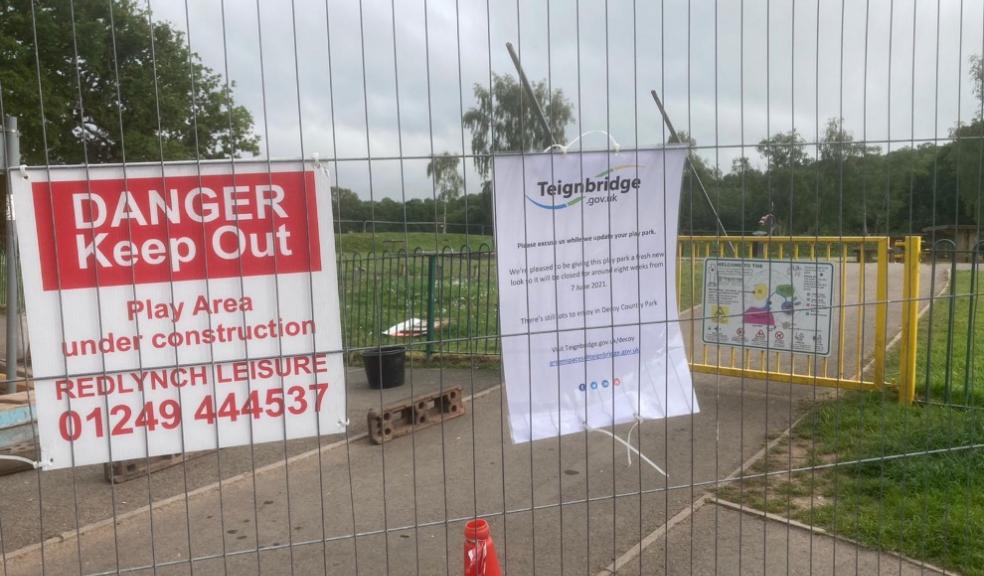 Work has begun on the major refurbishment of the play park at Decoy Country Park which will see the popular facility closed for several weeks.

The play park in Newton Abbot is being given a revamp with new equipment which will provide ‘excitement, fun, movement and adventure’ for youngsters of all ages.

The six-figure sum spent by Teignbridge District Council refurbishing the three play zones at Decoy Country Park is funded by the Community Infrastructure Levy and S106 funds gained through the planning process, and work was initial slated to take place in 2020 but was delayed by the coronavirus pandemic.

The aim of the scheme is to ensure the provision of an updated exciting facility which maintains Decoy Park as a popular outdoor attraction, and will include a junior area, a toddler area, and an adventure area, as well as a new 5.4m high timber tree house to replace the existing 5.62m high castle unit.

Workmen last week began the process of removing the existing play equipment, with fencing erected around the area to restrict access while the renovations take place.

The play park will be closed for approximately eight weeks, the council has said, adding that there will be a reduction in the number of car parking spaces as work takes place, but that the kiosk remains available for refreshments, as does the rest of the award-winning country park.

What the new play park is set to consist of

The main feature of the new playground is a Tree House multiplay climber. Standing at a total height of 5.5 metres high, the main feature is the viewing platform which will provide commanding vistas over the adjacent lake.

There is a tube slide from the view platform, which, at its top, also provides views out from the clear Perspex sides here.

A lower-level slide ensures that younger children can also play with their older friends on the same piece of equipment. There are multiple climbing activities (arches, ramps, ladders, nets, and ropes on the unit as well as a challenging balance walk). The Tree House will be finished in a mid-brown colour to fit in with nature as much as is possible.

Further theming will take inspiration from the lake. The main multi-play unit is based on a little ship and it provides opportunities for role play, incorporating a steering wheel, a play compass and a play telescope, social play, sliding, and climbing.

Accessible steps allow the youngest child to get up onto the top deck, while the ship is located on the side of the area so as now to hamper site lines up the play area.

There will be a wobble bridge which ‘traverses the water’ over to a hill, where children can crawl through the underground tunnel, while further social play is available via the four-seat rotating Polka unit.

There will be a two seat spring seesaw and a ‘springy’ with a back, so as to allow use by some physically challenged children and their careers. The wet pour links up to the cradle swings, thus reducing the amount of mud that is produced when the playground is used in the winter months, while surrounding seats will be set into the grass rather than the wet pour.

The two aerial runways will be replaced completely as the existing ones will not last for the design life of the new play area. In place of the Hestia, there will be a Robina and stainless steel climbing frame, providing a 2.5m fall height and all sorts of climbing activities.

There will also be a Spinning Machine which ‘spins vertically’ and ‘lead to hoots of laughter from users’.

The aim is to refresh the park and make it more usable by removing some of the worst mud spots. A new Pavilion Shelter will be in the same space, with seating on the inside, while the pathways leading up to and around the play area will be cleaned and finished in a green paint to add to our naturalistic desire.

New rustic benches and picnic benches are included, now either set into grass around the perimeter of the play areas, or onto the existing hard standing pads, while the two picnic benches adjacent to the new climbing frame will be surfaced in TigerMulch to help prevent the muddiness here in the winter months.

There will also be the addition of a basket swing and associated safety surfacing, to be located adjacent to the other two swing sets.

Decoy Country Park is a much loved and a Green Flag award winning country park and local nature reserve on the edge of Newton Abbot.

It includes formal playing fields and a large children’s play area with a water play feature, a lake supporting water sports activities and a deciduous woodland with a trim trail incorporated into it.

The Park provides opportunities for quiet countryside recreation such as walking, wildlife watching, duck feeding and picnics, with parts of the Country Park either a County Wildlife Site (CWS) or a Site of Special Scientific Interest (SSSI).

The Country Park was first created in 1988 and was named after an earlier lake at which ducks were lured into a ‘decoy’ and then caught and killed for food.

But where the area now supports a wealth of wildlife, with the main habitats being ponds, streams, fen, wet woodland and heath woodland, it was once a clay quarry.

Facilities at the park include the BMX race track and dirt jumps, sports pitches, the woodland walks, picnic benches, a refreshment kiosk, fishing, sailing and canoeing on the lake, and the large play area.