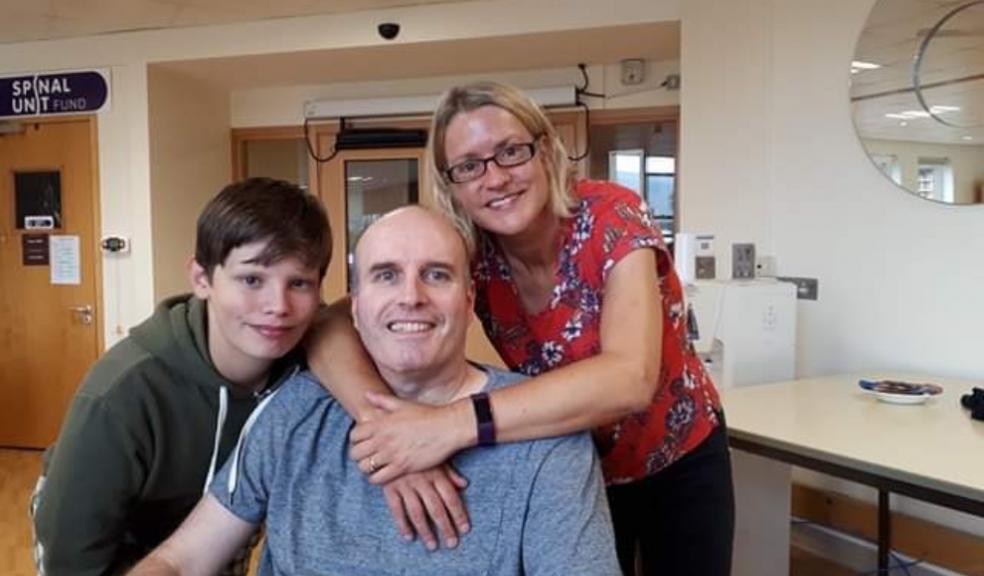 When Mike Clake had a cycle accident that left him paralysed from the chest down, one of the biggest concerns for him and his wife Sharon, was how their then 13-year old son, Max, would take the news. Sharon said, “Knowing his dad would never play football with him again, or be able to run with him, or do any of the things that they used to do… it was so hard.” But, to their surprise and amazement, young Max visited his dad in hospital and said, “But he’s still my dad, it’ll all be ok. Why is everyone worrying?”

Mike had been out on a charity cycle ride on Dartmoor in May 2018, raising funds for St Luke’s Hospice in Plymouth in memory of a dear friend, when his tyre burst and he flew over the handlebars. He remembers the accident as if in slow motion, “I was coming down a hill when I had the blow out; the tyre split totally, the bike wobbled and I sailed through the air. I knew it was bad straight away as I couldn’t move anything. I’d fractured my eye socket too, so all I could see was blood, and I was struggling to breathe and panting for air. I remember the helicopter landing and I could hear the conversation between all the paramedics going on around me, but I could only see their feet!”

Devon Air Ambulance treated Mike at the scene and then flew him swiftly to Derriford Hospital where scans revealed he had a C6 spinal cord injury, as well as L1, T1 and T4. He was placed in an induced coma and was in Intensive Care for the first four weeks after the accident. He has only limited memory of that time in hospital and has been fascinated to read the diary that the staff from Intensive Care kept for him.

“I do remember that the cocktail of drugs I was on gave me some really psychedelic dreams. Then I developed pneumonia and was put on a ventilator; talking was almost impossible and I remember that when I coughed, I sounded like a baby, it was most odd. I also remember my surgeon saying that, in his 28 years of surgery, mine was the worst accident he’d ever seen and he made no promises about my recovery – he was very blunt.”

After six weeks in Derriford, Mike was transferred to the specialist spinal unit in Salisbury where he spent the next five months. He faced an array of physical and emotional challenges as he came to terms with his new way of life.

“I am now tetraplegic which certainly took some getting used to. The first time I tried to sit up, I just fell over like a ‘weeble’. I realised then how hard it was going to be and what a long road ahead I had in front of me.”

Learning to navigate as a wheelchair user, he remembers the joy of being able to visit Horatio’s Garden. “It’s the most beautiful outdoor space that gives patients in Salisbury spinal unit somewhere to go that’s calm and peaceful. There are stunning plants, water features, quiet areas, space to be sociable and places just to sit and think. I met some great fellow patients while I was there, many of whom I’m still in touch with, and we really helped each other.”

Mike’s rehabilitation and strict physiotherapy regime led to time in Holton Lee in Dorset as well as Waters Park House in Devonport. In all, it was 18 months before Mike was able to leave hospital. During that time, having realised and accepted that their family home was now completely unsuitable, his wife Sharon had sold their house, moved to a bungalow and overseen some major adaptations and reconstruction work in readiness for Mike’s return.     Sharon explained “It was such a tough time in so many ways. We even lost our dog while Mike was in hospital. But, thankfully, Max was my absolute rock through it all. And, with support from family, friends and The Royal British Legion, we got everything done. It was so brilliant to finally have Mike home with us.”

Family life has taken on a ‘new normal’ now, with Sharon back at work and Max, now 16, studying at Bicton College. Mike, who is also back working part-time, has retained his positive outlook throughout and is optimistic about the future. “With massive thanks to my physiotherapist, I now have a Stand Aid at home, which is helping to strengthen my stomach and leg muscles and I’m investigating a new wheelchair that will make it easier for me to be independent outside. I still only have limited use of my arms and hands so a battery-operated wheelchair would make a big difference. And, hopefully, I’ll be getting an Assistance Dog too. I’ve seen the amazing things that these dogs can help with and I can’t wait. There’s no point in looking back at what might have been, you have to look forward. We are where we are, but there’s still an exciting future ahead.     To complete this long journey, and to say thank you to Devon Air Ambulance for their swift response and assistance given to Mike at the scene, Sharon is taking on a challenge of her own along with a close friend and her sister who have supported her in so many ways over the past 3 years. In August the trio will walk the remaining 38 miles that Mike didn’t get to complete. They will start off in Okehampton where Mikes accident happened over 3 years ago and will finish their mission in Plymouth.    Sally Hilton, Head of Fundraising at Devon Air Ambulance said: “I have spoken to Sharon recently and she is a remarkable woman who has had to change every aspect of their family life. Sharon and her son Max have taken one day at a time over the last 3 years to support Mike on his road to recovery which has been a huge challenge. Her decision to finish the journey that Mike started is absolutely fantastic. We are very proud of Mike for making such amazing progress and of Sharon who is an inspiration to many in taking on this 38 mile fundraising mission of her own which in turn will help us to respond to more patients like Mike when the unexpected happens.”    If you can help to give Sharon and her two walking buddies a boost to their fundraising efforts, please visit her Just Giving Page here to donate: https://www.justgiving.com/fundraising/Sharon-Clake