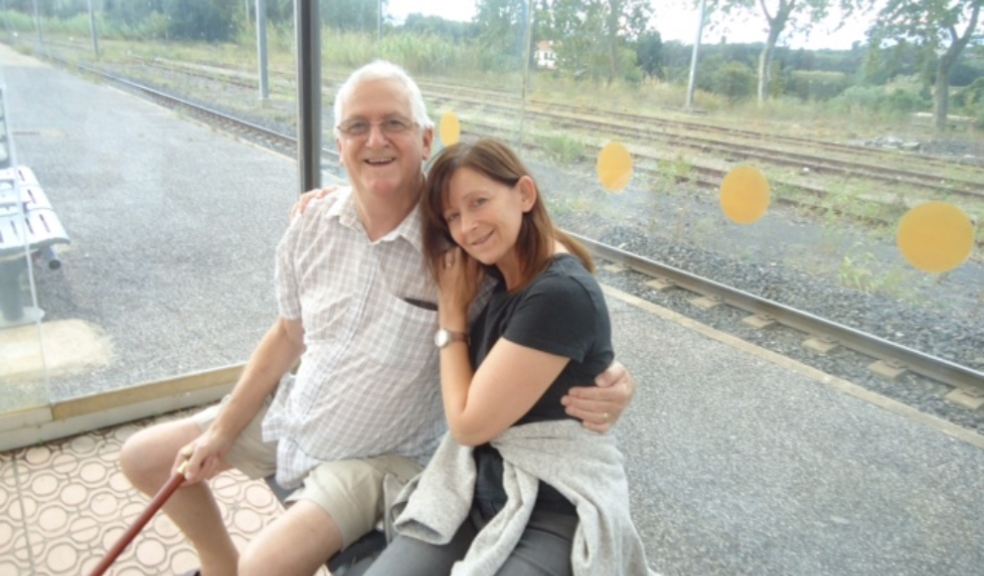 A devoted daughter has vowed to keep her promise to fight the incurable cancer that claimed her father’s life by running 100km in just 24 days in his memory.

Paula Summerfield Walters, from Tiverton, lost her father, James Summerfield Surman, to myeloma, an incurable blood cancer back in June 2020.

Since his passing Paula has stayed true to her promise to keep up the good fight by supportingMyeloma UK, a small charity dedicated to funding research into treatment and, eventually, a cure.

The mother-of-two is now gearing up to complete the charity’s festive 100km challenge, Lost in Lapland. She set off on her virtual race through Lapland on December 1 and is aiming to reach the finish line on Christmas Eve.

“My dad was so unbelievably strong throughout his battle with myeloma and I promised to continue his fight,” said Paula. “The way to do that is to support the organisation that wants myeloma to be eradicated as much as I do - financially and through raising awareness. Running is very important to me and I'm always looking for motivation to keep pushing on now my dad is gone. Covering 100km in 24 days is a challenge but Lost in Lapland is a fun way of having a positive focus - and a great way of honouring my dad and all he stood for.”

Paula’s dad, James, originally from Cheltenham, was living out his retirement in the south of France when he started experiencing excruciating back and hip pain. Following months of back-and-forth GP appointments, during which his symptoms were repeatedly dismissed as trivial, his condition deteriorated, and he was eventually rushed to A&E with kidney failure. In July 2015,James, then 74, was diagnosed with myeloma. It was incurable.

“When we found out, it was devastating,” explained Paula. “We had never heard of myeloma.Looking back he had probably had it for a while because he was really lacking in energy. He had had hip and back pain and he was back and forth to the doctor’s. It was very hard for us as a family.”

Myeloma occurs in the bone marrow and currently affects over 24,000 people in the UK. Despite being the third most common type of blood cancer, it is especially difficult to detect as symptoms, including back pain, easily broken bones, fatigue and recurring infection, are often linked to general ageing or minor conditions.

While it is incurable, myeloma is treatable in the majority of cases. Treatment is aimed at controlling the disease, relieving the complications and symptoms it causes, and extending and improving patients’ quality of life.

More than half of patients face a wait of over five months to receive the right diagnosis and around a third are diagnosed through an emergency route. By that point, many of them are experiencing severe or life-threatening symptoms.

While James initially responded well to treatment, he never quite went into remission. But no matter what the cancer threw at him and despite a near-death experience during which he suffered a heart attack and had to be resuscitated twice before being placed in a medically induced coma, the husband and father-of-three never gave up fighting.

“He came back from it and we had another three years with him – I always knew I had the best dad but I didn’t realise how strong he was,” added 57-year-old Paula. “Nobody could have fought harder than he did.”

Even as James started running out of treatment options at the end of 2019, he took it all in his stride, never complaining or showing signs of giving up. He passed away six months later, in June 2020, surrounded by Paula and his family. He was 15 days shy of his 79th birthday.

“We were told he had three weeks but he only made it two and a half. Myeloma just took himover. It was a heart-breaking time, but also special that we were all there together and able to fulfil his wish to die at home with us around him. Nothing was left unsaid. He told me to keep smiling and be happy and that's what I have been trying to do.”

It will be the second time Paula has tackled Lost in Lapland for Myeloma UK, after taking part last winter in memory of her dad.

“The challenge kept me going at the end of the worst year of my life,” she said. “It would be my dearest wish if there was a cure and that’s why I’m doing this for Myeloma UK. They advocate for patients and get new treatments approved. I know that the drugs and the treatment options my dad had made a difference. For people with myeloma new treatments are like gold dust; they give us all hope.”

She added: “I don’t want myeloma to win and I don’t want people to go through what my family went through. Myeloma for me is the enemy. Every time I run, I feel like I am kicking it. It is me against myeloma. Opportunities like this enable me to fulfil my promise to him to continue his fight.”

To support Paula, go to https://www.justgiving.com/fundraising/paula-summerfield-walters

To sign up to the virtual Lost in Lapland challenge go to https://www.myeloma.org.uk/fundraising-and-donations/lost-in-lapland/