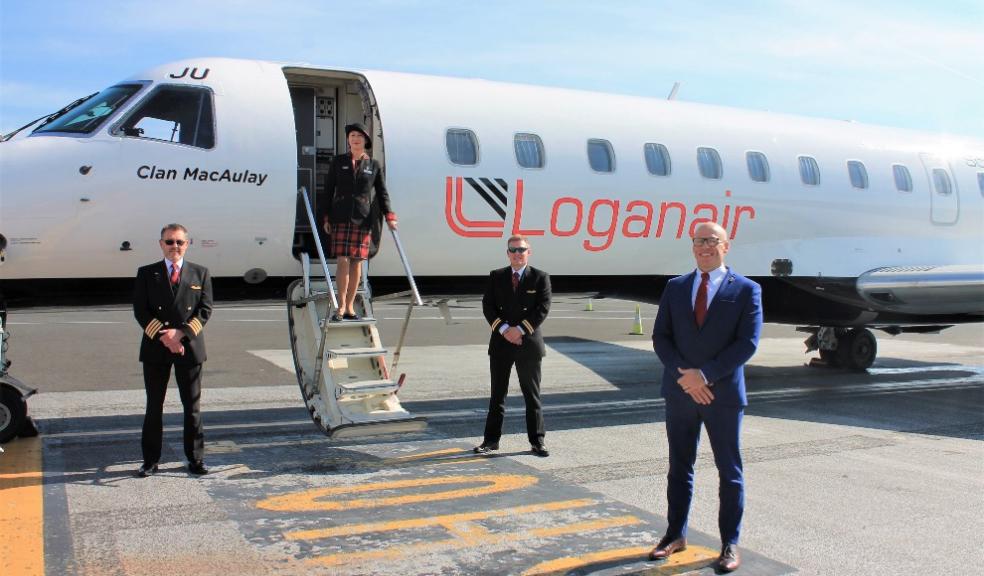 The first service between Exeter and Newcastle took off for the first time today, as Loganair brings back connectivity between the two cities for business and leisure.

Operated using a 49-seat Embraer 145 regional jet, the service will see twice-weekly flights on Monday and Friday throughout winter with lead in fares of £54.99 each way.

Within the airline’s recently launched summer 2021 schedule, the route will see an enhancement with a daily service Monday to Sunday from March next year, with a double daily on Fridays – perfect for those planning staycations next summer.

The service will see the route restored for visiting family and friends, business travel and holidaymakers once again after it was left vacant following the collapse of Flybe earlier this year.

Kay Ryan, Chief Commercial Officer at Loganair, said: “We’re pleased to be able to restore yet more UK regional connectivity with the launch of our flights between Newcastle and Exeter. For many, Summer holidays this year were a write-off, so we’re confident the introduction of daily flights for the summer 2021 programme will be especially welcome for families looking to make the most of next year, as well as for businesses as market conditions improve.”

Matt Roach, Managing Director at Exeter Airport, said: “I’m pleased to welcome this new Loganair route to Newcastle in another milestone day for Exeter Airport following months of well-documented hardship. This is the latest in a succession of new and returning routes, and we’re delighted that Loganair is extending its footprint from Exeter. It’s important we restore as much regional connectivity as possible and we’re ready to receive passengers with new health protocols at the airport and onboard with Loganair. We’re already looking forward to Summer 2021 when schedules will be further enhanced to Newcastle and Loganair will add Glasgow flights.

"We are delighted to celebrate the launch of today's addition to the network with this new Exeter service. We hope the route will be warmly welcomed by passengers visiting friends and relatives on the South coast, looking to a UK based holiday or those needing to travel for business."

Richard Knight, Chief Operating Officer, Newcastle Airport, said: “In recent years Loganair has invested significantly in the North East by serving key destinations such as Aberdeen, Stavanger and Southampton. The airline also provides many connections beyond these airports, including to the Scottish Highlands, Scandinavia and most recently Jersey and Guernsey - now accessible on one single ticket via Southampton thanks to a new partnership with Blue Islands.”

Loganair, now the UK’s biggest regional airline, has continued to fly more services than any other UK passenger airline during the crisis. In addition to keeping lifeline routes to the Scottish Highlands and Islands open during the pandemic, the airline has also maintained services for essential workers throughout and is now in the process of introducing both new and returning routes to reconnect the UK.

All flights, including the new Newcastle-Exeter service, are operated under the “Simple Steps to Healthy Flying” protocols which Loganair announced in mid-May – the first UK airline to set out detailed plans on how customer safety will be attained and maintained whilst COVID-19 is present.  Loganair’s initiatives mirror those later announced by the European Aviation Safety Agency (EASA).

Loganair’s advice to customers regarding travel safety during the current COVID-19 crisis is available on its website, and customers are urged to check for regular updates.

All fares include 15kg luggage as standard, with a 33% child discount available for those aged 11 and under, while infants fly free