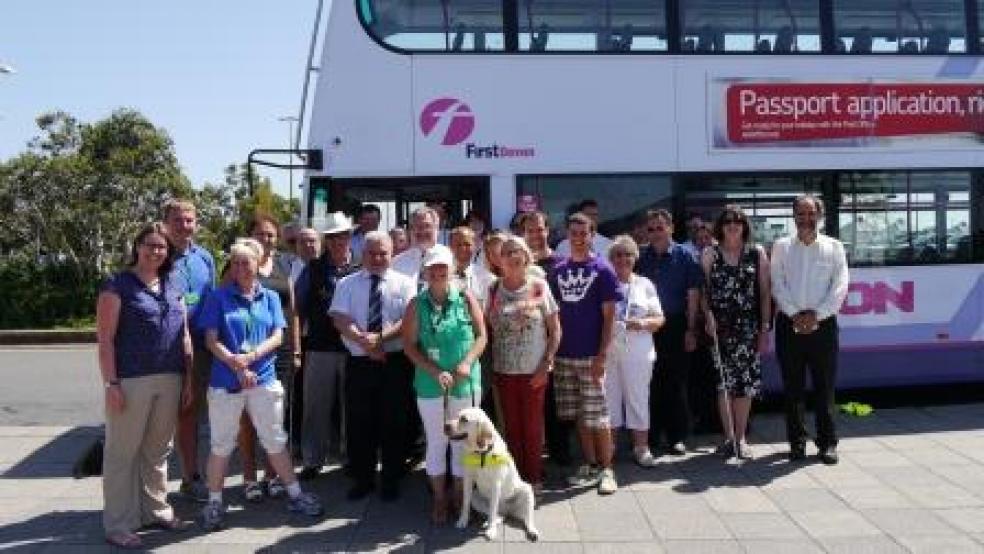 Local blind and partially sighted people and bus drivers came together on Friday 19 July at the George Park and Ride in Plymouth to share their experiences of bus travel and highlight how journeys can be improved.

Called 'Swap with Me' the event was run jointly by First in Devon and Cornwall and the Royal National Institute for Blind People (RNIB).  It was held to allow bus users with sight loss and bus drivers to exchange places.

Taking place on the 19 July it also marked the start of the RNIB's fortnight of action around its latest campaign: Stop for me, Speak to me.

A recent RNIB survey of blind and partially sighted people revealed a number of barriers:

At the Plymouth Swap with Me event bus drivers took part in tasks such as trying to board a bus and pay for a ticket whilst wearing ‘SIM specs’, glasses that simulate sight impairment. By experiencing first-hand the barriers that blind and partially sighted customers face when travelling the drivers learned about the importance of the Stop for me, Speak to me campaign's key asks.

Customers with sight loss were also invited to swap places with the drivers and experience how difficult it can be to hear passengers from above the noise of the engine and behind the assault screen.

By giving each the opportunity to experience the other’s perspective, both groups were able to come away with a greater awareness of how to support the other and make bus journeys easier for everyone.

Natacha Tagholm, Regional Customer Services Manager for First in the South West and Wales, says, “Everyone had a lot of fun at our Plymouth Swap with Me event, which marked the start of the RNIB’s fortnight of action for its bus campaign. The day was well attended by representatives of disability access groups, our customer panel members and of course our bus drivers and regional managers.

“The drivers really appreciated using the SIM specs whilst trying to boarding the bus and find a seat and our customers with sight loss got to experience how difficult it can be to hear from the driver’s seat, so some great lessons were shared on both sides.”

Marie Jenkins, South West Campaigns Officer at RNIB, says, "To actually experience, even just temporarily, what it's like to negotiate a bus journey as a blind or partially sighted person was a useful learning experience for the drivers, and the event was a real success. The people who attended were really positive that the drivers had listened to their concerns and would be much more aware of the difficulties blind and partially-sighted people face and could assist those travelling on their routes.

"Catching a bus should not be a sight test. Local bus travel is a lifeline, providing an important means of transport within the community for those who are not able to drive. However, the difficulties blind and partially sighted people face when making journeys are unacceptable and often unnecessary. We want operators to remember one simple principle: Stop for me, Speak to me."

RNIB’s fortnight of action (19 July – 2 August) to promote its Stop for Me, Speak to Me bus campaign will feature a series of events and activities across the English regions, including Swap with Me events, mystery shopping, blogging and letter writing.

To link the regional events together across the fortnight there will be a bus relay from one end of the country to the other. The relay will involve volunteers undertaking a leg of the journey / relay in their local area. It will also visit the minister for Transport, deliver him evidence gathered throughout the campaign and a call for him to take action.

For more information about First in Devon & Cornwall, or to view timetable information log onto, www.firstgroup.com/Devon. Those wanting independent travel information in the UK can also call Traveline on, 0871 200 22 33, or visit www.travelinesw.com.