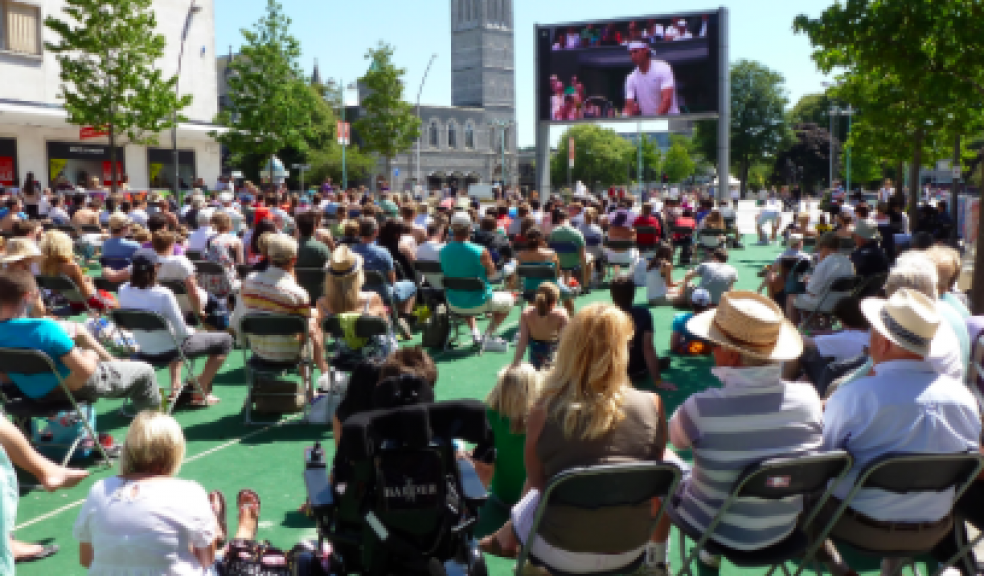 The city centre will be transformed for the Wimbledon fortnight – from July 3 to 16 - with the Big Screen showing every grunt and backspin as the world’s tennis elite battle it out for supremacy.

The tension will be palpable as the likes of Andy Murray, Rafael Nadal and Venus Williams fight for every ace and advantage.

And hundreds are expected to gather to watch the world’s greatest players on the Piazza, which will be turned into a mini tennis club complete with artificial grass, vintage deckchairs, picnic benches and a fantastic range of food and drink.

The annual Wimbledon celebration is organised by the Plymouth City Centre Company and, this year, is sponsored by Nuffield Health.  General Manager of the two Nuffield Health Fitness and Wellbeing centres in Plymouth, Simon Jones, said they could not wait for the first player to serve.

The Nuffield team will be bringing a host of tennis themed paraphernalia with them to set the scene including a gazebo, flags, interaction boards, balloons and bunting, as well as a small tennis court kit for anyone eager to emulate their idols.

Mr Jones said: “This is such a popular event in the city and we’re delighted to be involved. Every year the atmosphere seems to get better and better as everyone gets behind Andy Murray.

“The excitement mounts as the finals approach and it really is one of those sports that gets everyone involved.

“It’s much more fun watching with other tennis fans and with deck chairs, great refreshments and artificial grass it will be almost as good as sitting on Murray Mound.”

During the two weeks, Nuffield Health will also be hosting a range of activities including mini tennis for children, face painting, interactive health quizzes, plus there will be a range of gym equipment for people to try.

On Sunday 9 – the traditional day of rest for the players – the Big Screen will be showing the 2004 movie Wimbledon – starring Paul Bettany and Kirsten Dunst.

And they will be providing a host of great food and drink, including ice cream, scones, gourmet burgers, cream teas, popcorn, fish and chips and, of course, strawberries and cream.