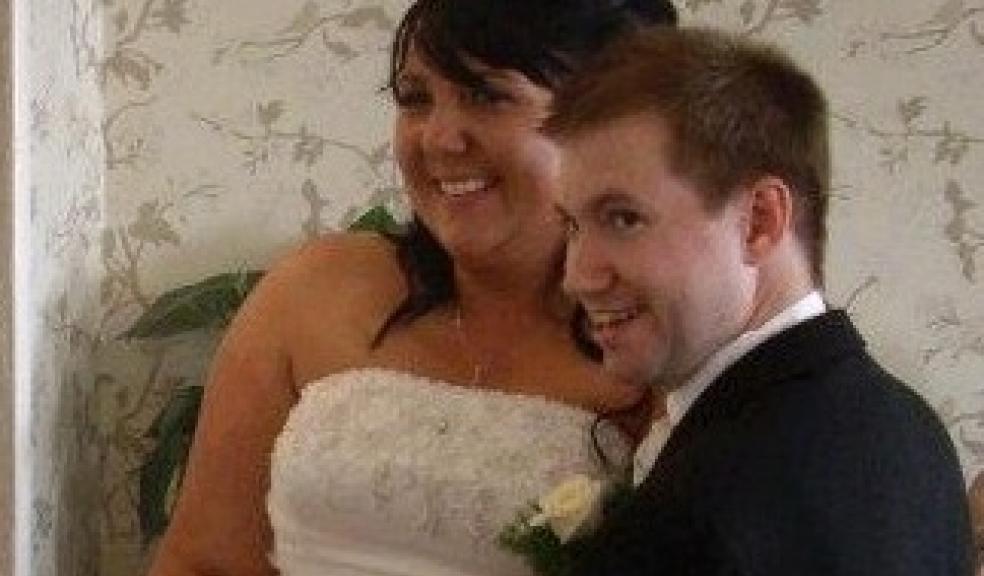 The Plymouth Daily talks to Claire Harding (nee Denford) about her marriage to Daniel last year at Plympton St Mary's Church in Plymouth...

We were extremely lucky for the big day. After having pretty much a washout of a summer and rain the first part of the week, the sun came out on the Friday to dry everything up and then again on the Saturday. I think that was the biggest worry for everyone!

I was actually quite calm and collected on the day. After more than 12 months of planning you have to accept that whatever happens now is beyond your control. If it happens, well it will be a part of the day... famous last words I hasten to add.

Our hairdresser (Sonia - Plympton Hair and Beauty) was absolutely superb and laid on a breakfast with muffins and croissants and had her juniors running around with coffees and teas for us girls (me, mum, Lindsey my sister, Chloe my stepdaughter and my aunt) so we were kept well fed and watered.

The biggest challenge for them was Chloe's hair, as she wanted it half up half down but the top bit shaped in to a bow! They managed it with at least half a can of hairspray and Chloe counted at least 50 pins!

Chloe and Lindsey had full length, light sage green chiffon dresses with an off-white sash around the middle. It was not our initial colour scheme, but the colour on the sample dress was absolutely perfect so a quick change of plan was needed!

Our bouquets were made by Miss Pinks Florist (again in Plympton). I had white roses with diamantes at the centre and extra beargrass in the foliage to differentiate mine from the bridesmaids'. Theirs were slightly smaller and didn't have the diamantes or the beargrass. The boys all had large white carnation buttonholes with the exception of Daniel, the groom, who had a white rose with a diamante again - he wanted bling too!

My initial thoughts walking down the aisle were "Oh wow! So many people are here!" It was so nice to see so many family and friends turn out, some I hadn't seen for years and we had at least 55 guests at the church itself. The ceremony just whizzed past and half an hour disappeared in what felt to be about 10 minutes.

We then went off to Shaugh Bridge, which is just half a mile from our venue, to have some absolutely stunning photos. Our photographer was Emma from Cheryl Burdett Photography, who was great to work with. And Cheryl was so organised and made sure all the shots we wanted were included and listed down for Emma. I would highly recommend them to anyone.

Remember I said famous last words? Well our car broke down on the way back to the venue, which set everything back half an hour! Thankfully the other car had not left the venue after dropping off my family and it was able to come back and collect us from where we were. Like I say... what will be will be and could only have happened to us. So much for my lucky horseshoe, but it was part of our day which we still laugh about.

The Moorland Hotel - Situated on the edge of Plymouth in the village of Wotter overlooking Dartmoor - organised all the catering, and I think the selling point for most was the starter of kangaroo kebabs... yes real kangaroo (the proprietors are Australian!) We gave everyone the choice of three starters, mains and desserts including the proprietor's (Patricia Dallas) personal favourite - a Raspberry Lullaby, which was a like Eton Mess. Nothing was ever any trouble for Patty and she was so accommodating right down to adding an extra starter for our one and only vegetarian (which we completely forgot about) at no extra cost.

I designed the cake, which was then made for us by a friend of our Usher. The sword was a replica of that carried by the Knights Templar belonging to our toastmaster, Dennis Northay. Before we could cut the cake, Daniel had to role play with Dennis an old English tradition of betrothing himself to his bride as an Olde English Knight.

In the days where the Lord of the manor took the bride for his own on her wedding night, the knight would vow to protect his new bride and her honour! Then the sword would be thrust in to the cake as a gesture of killing the lord. It was a bit of a surprise, so for Daniel, having to do a speech and then learn a script in about 15 minutes, it left him a bit flustered to say the least!

In the evening we had a barbecue with burgers, sausages, chicken etc - our veggie had quorn - out on the decking. We had invited another 20-30 guests for the evening to enjoy the disco with a burger and beer. We struggled so hard to find a song for a first dance. We really didn't want the usual songs that are so inevitable but we settled on Starship's Nothing's Gonna Stop Us Now, which was perfect.

We honeymooned at home and enjoyed mostly days out at the beach at Exmouth and also went to Living Coasts at Torquay. It was a good excuse to be lazy and collect our thoughts, read cards and open presents. And when I got back to work... the weather changed again and went back to rain!

The best advice I can give any bride is "What will be, will be" and I'm sure many others would say that. You can't control fate so if the car breaks down... c'est la vie! I am also a stickler for planning and I did all the booking of the big things (car, church, venue etc) in probably the first few months after our engagement.

I am so glad I did because our first florist let us down - we only found out by chance that she no longer owned the place and left. That gave me at least six months to look at other florists and choose one within my budget.

Finally, the day itself goes so fast, and you need to make sure you absorb every moment of what is your day. It's nice to stand back and look at what everyone else is doing on your day too... when you get the opportunity :)