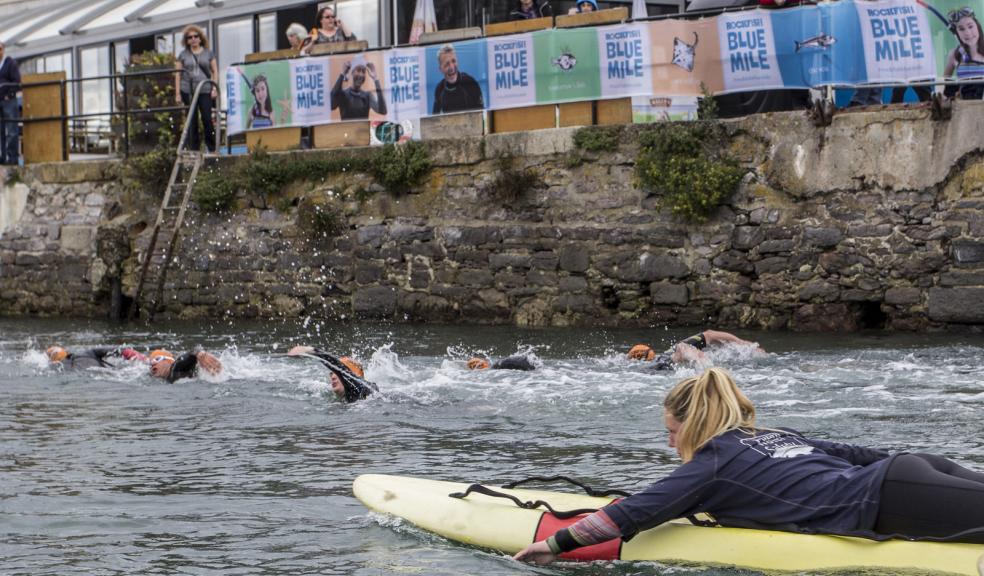 The Rockfish Blue Mile got Plymouth's 2015 Ocean City Festival off to a cracking start, with on-the-water action taking place off the Barbican and Hoe waterfront throughout the day on Saturday 5 September.

This was the fifth Plymouth Blue Mile and the first time with new sponsors Rockfish and charity partners, Plymouth-based The Shark Trust.

The day's events got under way in perfect conditions in the shadow of the historic Mayflower Steps. The first swim wave started bright and early at 9.30am and was won by James Bettany from Plymouth. “I really enjoyed that," he said. “The conditions were nigh-on perfect and I did it much more quickly than I thought I would.”

The spirit of the day - and of the whole Rockfish Blue Mile event - was summed up by first timer, Sally Richards, from Plymouth. After successfully completing the course out into the Sound and back, she said: “I just wanted to get out there in the water and challenge myself. And I'm really glad I did - it was fun.”

Another first timer, Carolyn Giles, said she did the swim to help the cause: “Supporting awareness around sharks is really important and it's one of the reasons I wanted to get involved.”

The second swim wave for more experienced swimmers was a one-two for Penzance sisters Sasha Osborne and Tamsin Thomas. The sisters were doing the event for the fourth time and both were delighted with their times: “The water temperature was nice and it was just an enjoyable swim all round,” said Sasha. “We come up here every year for the event and spend the weekend in Plymouth. It's great.”

The swim waves were followed in the afternoon by the team challenge, the aquatri and the paddle races - kayak and stand-up paddleboarding. The team event sees three members each doing a discipline, while in the aquatri, competitors do all three. The team challenge was won by Sport Environment and the aquatri title went to Sarah Mimpriss from Plymouth, who was doing the event for the first time: “It’s my birthday weekend and my friend Sandra Dring entered me for it. I swim quite a lot but I’ve only paddle-boarded once.” As it happened Sandra finished fourth and her husband Ian was runner-up!

The final events of the day saw Newquay lifeguard Dom Moore win the 1-mile SUP event on a Naish board and Steven Dodd, Plymouth’s double silver medallist at the recent Special Olympics in LA, win the 1-mile kayak race in a Fatyak Kayak. Dom said: “You turn the corner out of the harbour and wow! What a stunning view in front of you!" And Steven’s verdict? “I loved it!”

Crowds lined the Barbican to support the swimmers and paddlers, and visitors to the event village were able to learn about the work of the Shark Trust and the importance of plankton to the food chain, with demonstrations from The Sir Alister Hardy Foundation for Ocean Science. The National Marine Aquarium was also there to help spread the marine conservation message.

For Mitch Tonks, owner of Rockfish restaurants, the event was a big success: "The Rockfish Blue Mile experience has been great. We're passionate about Britain's Seafood Coast and the event sums up everything we're about - having fun on and off the water, raising awareness about our seas and celebrating what this amazing coastline has to offer.”

Managing director of the Shark Trust, Paul Cox, took part in the team challenge and kayak event and also spent much of the day discussing the work of the charity with the public. He said the Rockfish Blue Mile had enabled the Shark Trust to get the message across to more people: "We work globally but we're based here in Plymouth so getting involved in this event makes sense.

“We've been able to engage with a new audience and raise some money. But mainly, it's about informing people of our work and letting them know about the great marine diversity in this part of the world. We should be celebrating that diversity. That's what we're about and that's what the Rockfish Blue Mile is about.”

The Rockfish Blue Mile is the brainchild of Plymouth triple round-the-world yachtsman Conrad Humphreys who said: “It's been brilliant to link up with Rockfish and the Shark Trust. It's such a perfect fit. We love our marine environment, we love the amazing marine life we have off our coast and we just want to spread the word as much as we can. It's extremely important that we do something now for our threatened sharks - many of them are actually resident here in our waters.

“And we enjoy kicking off the Ocean City Festival with an event which has lots of people just having great fun in and on the water in what is a fantastic location.”

Next up ... the first ever Brixham Rockfish Blue Mile in July 2016.  Watch this space!