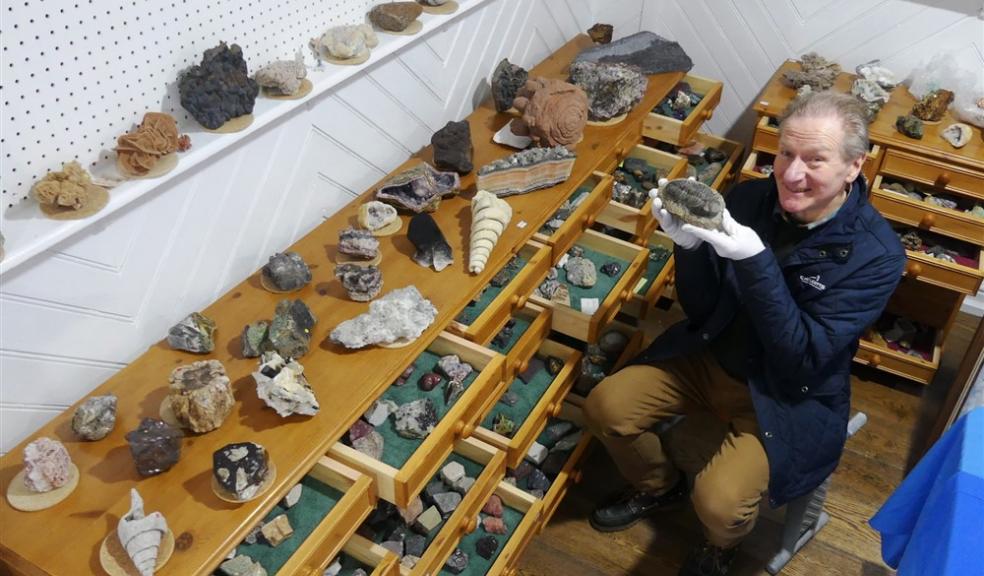 A fascinating collection of minerals and fossils from around the globe is due to be auctioned at Chilcotts Auctioneers April sale in Honiton.

With over 1200 samples, the ‘Norman Govier Collection of Minerals & Fossils’ has been amassed over two lifetimes by two different collectors, both with a passion for uncovering and cataloguing these ancient natural items.

Rare and interesting specimens include a Megalodon tooth from the Miocene period, a Mosasaur tooth from the Cretaceous era and Mammoth bone from the Pliocene epoch, and exotic stones including crocidolite from South Africa, agate from Brazil and desert rose from Sicily. Many pieces have been collected from the South West region including Dartmoor, Exmoor, and Cornwall.

“We’re selling this wonderful collection on behalf of the family of collector Norman Govier, who passed on in 2020,” explains auctioneer Duncan Chilcott.

“There’s a wonderful story behind it, revealing a whole community of collectors who have the same enthusiasm for their pastime of exploring old mines.”

Norman grew up in North Molton and got permission from local landowners to investigate the spoil heaps of abandoned mines in the area, hoping to find interesting items. This fascination stayed with him into adulthood when he purchased a large collection of minerals and fossils from a South Molton antiques shop, which came with detailed handwritten indexes, one alphabetical and the other numerical.

He decided to add it and began foraging around old mines again. His passion renewed, Norman became a member of the former Exmoor Mines Preservation Society, helping to stabilise crumbling buildings around the historically important Bampfylde Mine, and volunteered on Sunday mornings at the Combe Martin Silver Mine where he was involved in digging out new seams. His wife always said she had to keep herself busy so she didn’t worry about him being in the mine shafts.

Along with like-minded enthusiasts, Norman went on organised ‘mining holidays’ all over the UK to explore defunct mines. As well as minerals and fossils, he amassed a number of miners helmets, lamps and other mining paraphernalia, much of which his family has donated to the Combe Martin Silver Mine Museum.

Using his professional skills as a carpenter and joiner he built two multi-drawer specimen cabinets to keep the minerals and fossils in. With help from his son, he created a digital catalogue of the pieces to go alongside the handwritten indexes; this Microsoft Access Database file will be available to the buyer of the collection.

Duncan added: “Norman’s family is very keen to see his work continued by another enthusiast who will be able to appreciate both the history contained within all the wonderful specimens, and the passion of the first two collectors.”

“The collection is being sold in its entirety with the cabinets included. It’s extremely difficult to value such an unusual item as there is little to compare it with, but we’re estimating between £800 and £1200.”

The April 17 ‘Antiques & Interiors; Collectors Items’ auction will be held at the Silver Street sale room near Honiton Community College; the lots will be on view at both Silver Street and Chilcotts’ new premises ‘The Dolphin Salerooms’ just 200 metres away, giving the chance for a sneak preview of the beautifully refurbished building, formerly The Dolphin Hotel.