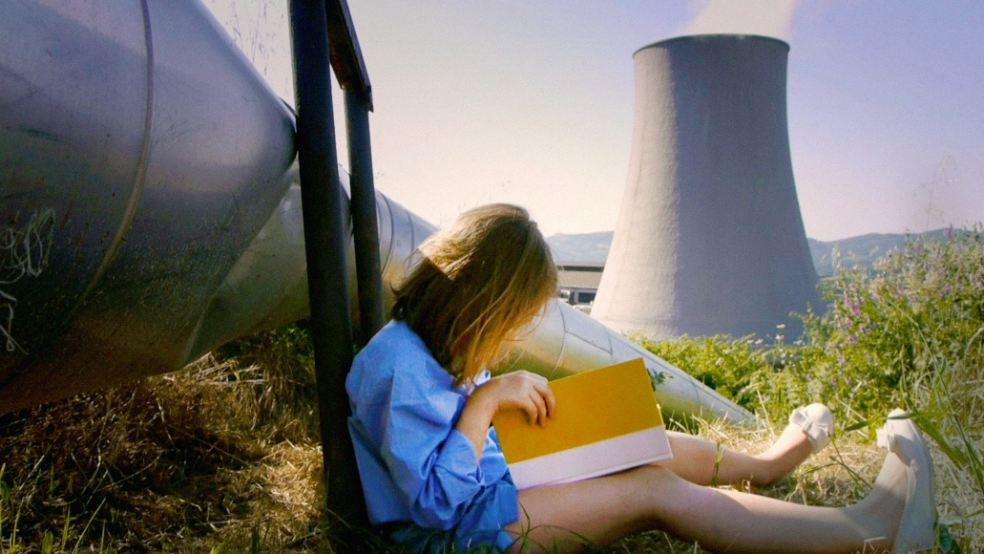 Children of Unquiet, 2014 and SeaWomen, 2012 share the experience of two very different communities: fisherwomen from the 'haenyeo' community on Jeju island, Korea, and children brought up by the geothermal powerplant in Devil’s Valley, Tuscany.

Both communities have a unique relationship to their environment which is rich in natural resources. As processes of extraction evolve, this way of life is increasingly threatened. Through sounds of labour and community, Karikis encourages thinking around legacy, resistance and possible sustainable futures, across the generations.

This film was created with a group of forty-five children living in Devil’s Valley in Tuscany, a volcanic landscape and home to the world’s first geothermal power station. The area has become depopulated following the automation of the process of generating energy. The children take over the empty spaces, recreating the noises of both the natural and man-made landscape: the hissing of steam, the bubbling of water and groaning and rumbling of metal work. It is through their collective voice that we can imagine resistance and change.

This audio-visual installation captures the experience of a 'haenyeo' woman’s day at sea. The 'haenyeo' are an ancient and fast-vanishing community who dive to depths of up to twenty metres with no oxygen supply to catch seafood, collect seaweed and find pearls.

The audio scenes include a rhythmic rowing work-song; the reverberant hubbub of the women’s communal baths, a sudden violent thunderstorm and the 'sumbisori'. The 'sumbisori' are the striking high-pitched and dolphin-like whistling noises of the diving women’s traditional breathing technique. This soundscape, along with the women’s profession are on the verge of disappearance.

To coordinate with this project, THG will feature a 'Climate Conversations' event on 11 February with special guests: artist Mikhail Karikis and Be The Change Society, an Exeter-based society focused on sustainability campaigning on and off Exeter University campus. Climate Conversations brings together local activists and project groups, with academics and artists specialising in these fields.

Mikhail Karikis is a Greek/British artist based in London and Lisbon. His work in moving image, sound, performance and other media is exhibited in leading contemporary art biennials, museums including the TATE and Whitechapel Gallery, and film festivals internationally.

These exhibitions are delivered in partnership with Arts and Culture, University of Exeter and Leisure East Devon, supported by East Devon District Council and Arts Council England. The exhibition has been supported with loans from the Arts Council Collection. Founded in 1946, the Arts Council Collection is the UK’s most widely circulated loan collection of modern and contemporary British art and includes important examples by all of the UK’s prominent artists. For more information, see: www.artscouncilcollection.org.uk.

Ruth Gooding, THG Curator and Arts Development manager said,  "This winter, we are delighted to open our 2022 programme Creative Communities and the Land, with two immersive film installations by international artist Mikhail Karikis - Children of Unquiet 2014 and SeaWomen 2012.

"In partnership with Arts and Culture, University of Exeter, we invite audiences to consider sustainable futures across the generations. The project which opens at THG, Honiton and Ocean, Exmouth on 15th January will be accompanied by a public programme, which continues our series of ‘Climate Conversations’ with our communities."

Alongside Karikis' films at THG, will be an exhibition documenting a unique selection of the work and process of contemporary, Bristol-based theatre maker, Tom Bailey.

Creating and touring work both in the UK and internationally through his company, Mechanimal, Bailey's work explores our human relationship to a changing planet.

Described as “extraordinary… moving and enlightening” (New Scientist), Mechanimal’s work has received awards and critical acclaim for shows that explore bird migration, species extinction, the transformation of the Arctic, resource extraction and life in the Sahara desert.

This exhibition presents a fascinating window on performance and process in creating ecological theatre work, from the rehearsal room to the landscapes of South West England, to the Arctic Circle and the Egyptian desert.