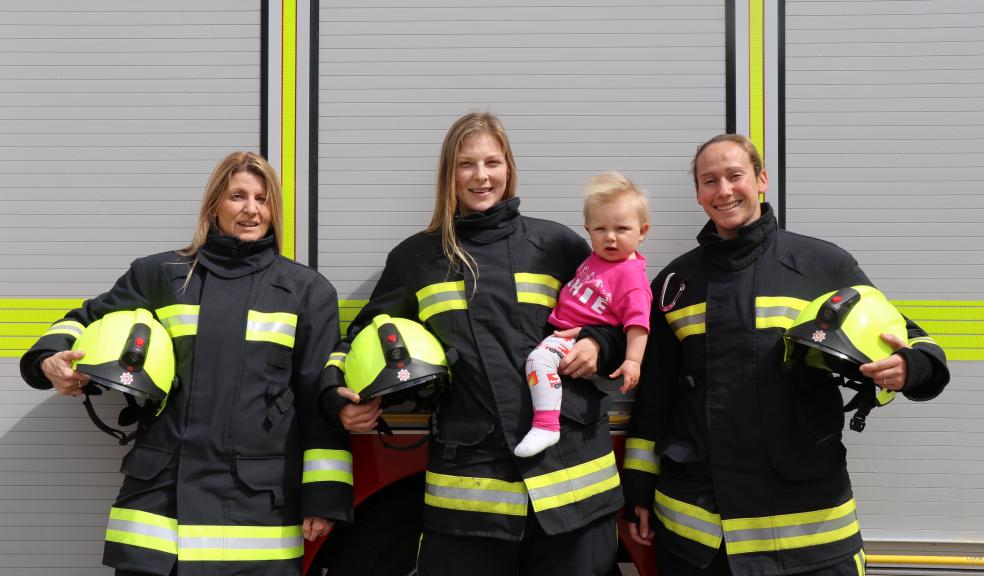 Three Plympton firefighters proved popular on social media after one of their colleagues posted on the Fire Station Facebook page a photo of them in the back of a fire engine returning from a call-out. You may well have seen their photo as they are now part of Devon & Somerset Fire & Rescue Services recruitment campaign for on-call firefighters throughout Devon and Somerset.

Do you live or work within five minutes of your local fire station? The Fire Service are looking to recruit professional women and men who are able to respond to emergencies in their area.

Sabrina, Lisa and Sharon were then interviewed for an insight into their lives and the motivation for them being a firefighter.

Sabrina (on the left in the photo) is a busy lady having five boys under the age of 10(!) working in another job, and being an on-call firefighter. Sabrina’s career with the fire service started earlier this year and she will be completing her training at the end of May 2018.

Sabrina explained: “I’ve always wanted to be a firefighter but never thought I was capable, until I had the children. I saw an advert and thought why not. For some reason my confidence grew after having children. I’m simply loving it! The crew have been brilliant, very welcoming, and I’m enjoying learning how to do everything. Really interesting.”

Sabrina explained that her work life balance is working well as she has a weekend on and a weekend off. In the week she works in the morning and her employer is happy for her to be on-call. Sabrina said: “This is a real bonus. The children have adjusted and now know sometimes mummy is on call. They are all really proud of me and think it’s great that mummy is a firefighter. For anyone thinking of joining the Fire Service I would say definitely go for it! It’s a very open place to work, the training and staff are brilliant. A wonderful place to work.”

Lisa (in the middle of the photo) worked as a firefighter for 18 months before taking maternity leave. She has been back for over six months now and explains why she was attracted to the fire service: “My other job is working in hospital theatre which is all very routine and I need that adrenalin rush! I saw a recruitment banner outside the Fire Station and popped in for a chat. Everyone was really helpful and I joined up.”

Lisa’s finds her work life balance since having little Sophie is working well. She is lucky to have a really supportive family and husband to help out when she has to respond to a shout.

“When I first thought about joining a lot of people from my hospital job said ‘Why do you want to do that? It’s a man’s job’. This just made me more determined.

“I would say to anyone who wants to join just give it your all and prove everybody wrong. Once you have proved yourself everybody has a lot of respect for you.  I often get asked ‘Do we get it easier as we are female?’ and I say ‘No’ we do exactly the same tests as the men.

“You never know what you are capable of until you try. So for instance when I was training for working in confined space I felt really nervous as I didn’t know how I would deal with it. Now it’s my favourite bit.

“It’s a great job as you have to think on your feet, when you’re in a fire engine you don’t know what situation you are going to as every incident is different. We have constant training so there is nothing routine about the role. I like that!”

Sharon (on the right in the photo) has been a firefighter for 3 1/2 years and is fully competent. She is a mentor to Lisa and Sabrina. When she first started her other job was as a postie, now Sharon works for Red 1 training others in BA safety.

Sharon explained: “When I began it took a while to get used to being on-call, especially at night. I used to be a bit on edge when going to bed, then when my beeper went off my heart would race. Now I’m used to it. I have everything laid out clothes, shoes and my keys ready to go. I even have a routine where I fold my trousers in a certain way, so they are quick to get on!

“My favourite part is going out on the fire engine, as you never know what job you are going to – from a fire in a bin, to a fire alarm, RTC or something more serious.

“I am a big supporter of women being involved in the fire service and want to get involved and help in any way I can. I would encourage anyone whose thinking of being a firefighter to go for it it’s a great job.”

If you are interested in becoming an on-call firefighter and want to know if vacancies are available in your area. Please call 01392 872200 for more information or visit our website.