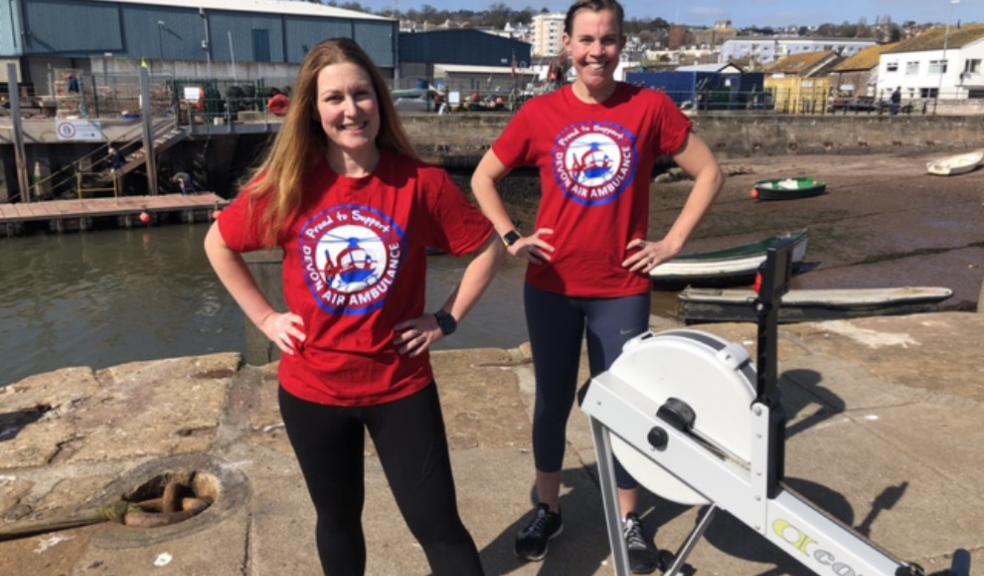 Rowing enthusiasts Sarah Luxton and Lucy Bufton have set themselves the ultimate challenge! They are planning to break a world record for the longest continuous Tandem Ergo-Row whilst raising vital funds for Devon Air Ambulance.

This bold world record attempt will take place outdoors at the Seasports Watersports Centre in Teignmouth who are hosting the event. The determined duo will take turns to keep the fly wheel turning from midnight on Saturday 1st May, through Sunday and onwards to Monday 3rd May totting up a gruelling 60 hours of rowing!

The current world record for this challenge in Sarah and Lucy’s age category is 24 hours and the overall record is 50 hours - Aiming for 60 hours these ladies are striving to be well ahead of anybody that has attempted to break the record before.

Sally Hilton, Head of Fundraising at Devon Air Ambulance said: “We are always so proud of our fundraisers and continue to be surprised by the incredible range of challenges they set themselves in order to raise vital funds for us. The challenge that Sarah & Lucy are undertaking is a whole new level. A world record attempt which takes them over a weekend is going to be physically and mentally challenging for them both. Everyone at Devon Air Ambulance is wishing them all the luck in the world and we hope that everyone joins them on the quay to cheer them on towards breaking that record”.

Sarah & Lucy have shared some interesting facts about their love of rowing and water sports:

How old were you when you first took an interest in rowing?

Sarah - I was 11 years old, my Mum joined the local rowing club’s Seine boat series and I loved the thrill of watching the boats race around the point in Teignmouth and going out on the Restless following the races out to sea. I knew I needed to get in on the action, so I started going to the Wednesday night ‘Novice nights’ and I was immediately hooked.

Lucy - I didn’t start until a lot later, I moved to Shaldon aged 22 and started rowing in a regatta dinghy. I took part in the Shaldon Regatta that year, including the long distance, Dawlish to Shaldon race. Although I didn’t do very well, I was also hooked!

What is your proudest rowing achievement?

Lucy: Rowing the Crazy River Race, which is an overnight row in the river Volga in Russia. It was 150 km long and took our team of 9, 18 hours to row in the Russian Yawls. It was a great experience to row in the boats and to meet the local people there.

Sarah: That’s a tricky one because so many stick in my mind. I would have to name a year as opposed to a specific race, 2015 when I was in a crew that reached the Scilly World Championship ‘A’ group, we came 5th in the Newquay County Championships, we won the Ladies Overall in the Great River Race in London and we were named Teignbridge Team of the year. That was a pretty epic year!
What else do you get up to when you’re not rowing?

Sarah - before Covid I would have said sleeping and working because my life was all about rowing training. Because Covid has impacted me being able to row  with my team, I’ve been able to do so many more things Zwifting, cycling, running, swimming, triathlons and obviously I’ve spent time with my ergo, old habits die hard. Haha

The world record attempt preparations will begin late on Friday night 30th April and will commence officially at 12:00am Midnight on Saturday morning. So, perhaps not at midnight, but if you are in and around Teignmouth a little later in the day on Saturday 1st, Sunday 2nd or Monday 3rd May, head down to the SeaSports Centre and help to cheer Lucy and Sarah on in their mammoth rowing challenge!

If you would like to show your support for Sarah, Lucy and Devon Air Ambulance, please donate to their fundraising page here : https://www.justgiving.com/fundraising/Scillyoarternatives