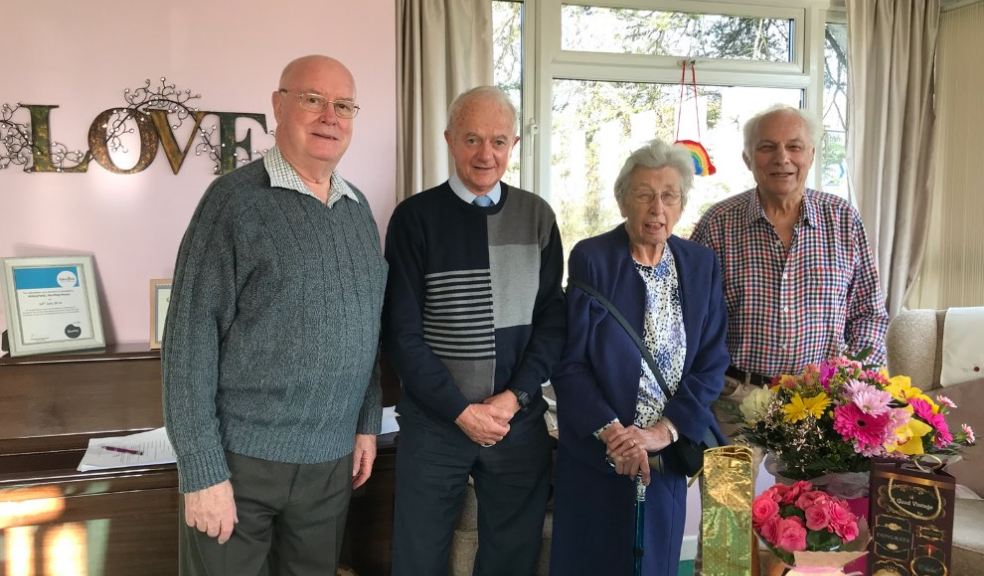 Three Trustees from the Abbeyfield Exmouth Society have made the decision to retire from their roles after a combined incredible 80 years of service to the organisation.

The Abbeyfield Exmouth Society, a member of The Abbeyfield Society, is the charity that manages Harding House, a sheltered housing complex for 13 older people in Littleham. As with all charities, it is run by a Board of volunteer Trustees who oversee its operation.

Abbeyfield Exmouth Chairman Hedley Ritchie presented a bouquet of flowers and a planted flower to Ann Hughes, who has stepped down after 40 years on the Board, including several as Chair. He said, “Ann’s time with us has been immeasurably valuable and she has been an absolute stalwart of the organisation for an astonishing time.

“An instigator for the extension of Harding House many years ago, her efforts have brought immense benefits to the quality of life of our residents, and her enthusiasm for and commitment to their wellbeing will be sorely missed.”

Two further Trustees, Richard Buckler and Roger Lawrence, have each spent 20 years giving their time to the charity, and were presented with a bottle of whiskey and gin respectively. Mr Ritchie said, “I took over as chair from Richard in 2018. He has been an important Trustee for over 20 years, and I am grateful for his efforts to keep the Board well informed of changing legislation during his time in the Chair.”

He continued, “Roger has also been a Trustee for over 20 years and a valuable contributor to the work of the Society. Right up to retirement, he was advising me and the other trustees on legal matters that helped to keep the home running smoothly.”

He added, “I would like to sincerely thank Ann, Richard and Roger for their service to Abbeyfield and Harding House, and wish them well in their retirement. I am also delighted to welcome local Councillors Joy and Alan Whipps to the Board, and I look forward to working with them to take Abbeyfield Exmouth from strength to strength in the coming years.”