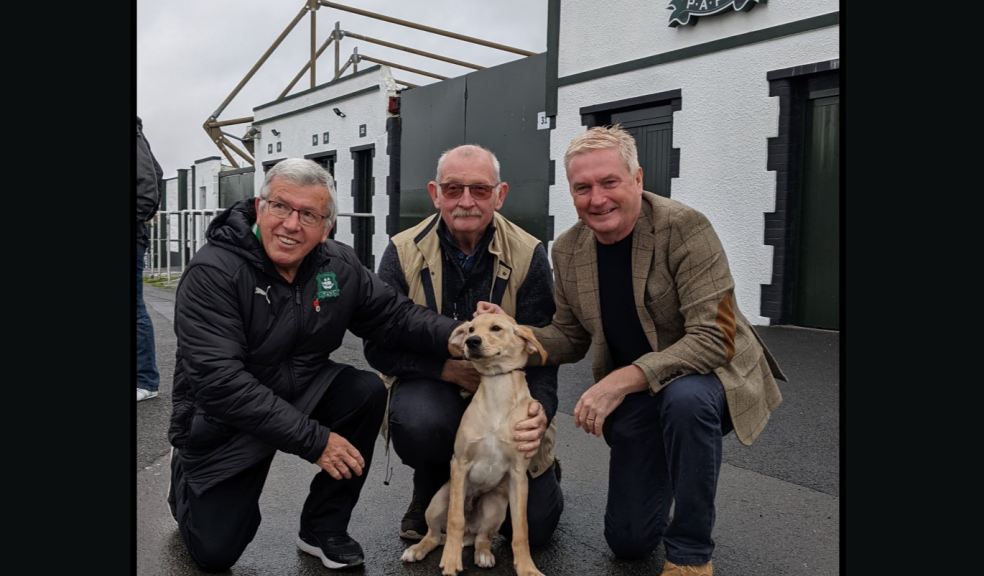 The Argyle Legends, the Former Players Association of Plymouth Argyle Football Club, have raised £10,000 for the sight loss charity Guide Dogs to name a future guide dog puppy, who they met earlier this month.

Golden Retriever pup Legend will live with a volunteer puppy raiser for the first year of his life and learn all the basic obedience that he needs. After that, he’ll be off to Guide Dogs school to level up his training and be matched with a person with sight loss. The Legends will receive updates on the puppy’s progress on his way to becoming a fully fledged guide dog.

The Legends began raising the funds at a charity ball in Boringdon Park in November 2019 which raised over £4,500, after former Argyle captain Leigh Cooper had the idea to raise £10,000 for Guide Dogs. Bucket collections and donation from Mundial Studios also contributed to the pot before the pandemic hit in March 2020.

“We hatched a plan this year to make up the rest of the target. We sent an email to our association players (over 300) explaining how far we’d come and asking for a £10 donation. The response was overwhelming. Within weeks we’d raised another £3,670 and we’d smashed the £10,000 target to name the pup. We hope that Legend and his owner may visit Home Park in the future.”

“We are absolutely delighted that the Legends have chosen to raise this money for Guide Dogs and name a puppy in the association’s honour. Guide Dogs relies on donations and it’s only through the support of local communities that we can continue our life-changing work.

“We hope our Name a Puppy project has shown how this generous support helps us make a difference for people with sight loss.”

Since 2007 when Argyle Legends were founded a sum of just over £140,000 has been raised for local charities, mainly through charity football matches.

There are around 35,000 people living with sight loss in Devon. While not all of these people are registered blind, their sight loss is significant enough to impact their daily lives.