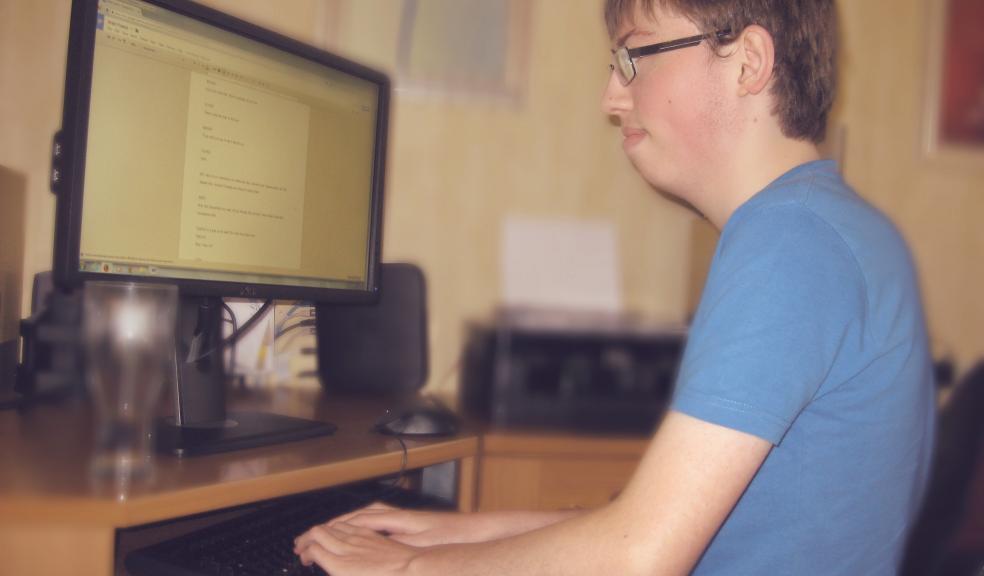 Plymouth teen Danny Williams, 16, is an aspiring scriptwriter of considerable talent. His incredible rise, as a budding writer is made even more awe-inspiring when you learn of the health conditions he has had to contend with since his birth. Remember the name Danny Williams, as one day I am sure he will be putting Plymouth on the map.

I met with Danny and his parents; Kevin and Julie, in their family home as I wanted the opportunity to fully understand the young man behind the writing. Luckily, It didn’t take long before his passion for the written word became obvious. This passion, when mixed with his unquestionable ability, will undoubtedly ensure that he really does have a bright future to look forward to as a writer. Things, unfortunately, didn’t always seem so straightforward.

Since birth, he has been forced to overcome a number of health issues, every one of which would have beaten the best of us. Danny, though, has taken everything in his stride and is determined not to let anything hold him back from achieving his goal of writing film scripts. This, unquestionably, makes him an unbelievable inspiration to anyone who has the pleasure of meeting him.

Things got off to a bad start when he was born eight weeks prematurely. Danny’s lungs did not manage to fully mature and as a result he developed life threatening respiratory distress and had to spend the first six weeks of his life in the Neonatal Intensive Care Unit until they had strengthened. As a young child, Danny then went on to have breathing difficulties and regular chest infections, some of them severe enough to put his life at risk.

Danny has a very rare Chromosome translocation, which brings with it a whole host of health-related issues. In the human body, genes are carried on threadlike structures called chromosomes. Usually we have 23 pairs of these. In Danny, parts of the 10th and 18th chromosomes have broken off and swapped places with each other. Danny’s mum, Julie, had discovered that he had a translocation during her pregnancy, but at the time the Doctors were unsure how this would manifest itself.

As well as issues with his lungs, this translocation has meant that Danny has verbal and motor Dyspraxia. This means that he struggles with his fine and gross motor function and co-ordination. This makes simple tasks like tying his shoelaces and talking hard to master, as they all require controlled movement of the muscles. That's not all though and Danny has also had to suffer through two painful operations to repair issues with the growth and alignment of his legs as they had developed at different speeds.

From a very young age, Danny has enjoyed to read and write. His supportive parents, who would regularly read four or five books to him every single night, have happily encouraged this. As soon as Danny began to seriously write, it became obvious that he had talent, so he set about searching for a local writers group. This is when he found The Young Writers’ Squad, which he attended between the ages of thirteen and fifteen. The Young Writers’ Squad helped dramatically in allowing Danny to mature as a writer and he is now a published author, having been published in a book, entitled ‘Anthology’, which is a collection of short stories by a number of young authors. Danny has also penned countless other books, including ‘Hero Force’. He has also written an enjoyable script called ‘Brain freeze’. His writing, these days, takes the form of sci-fi style superhero adventure stories.

When you read through some of Danny’s short stories, you realize that they are all written with the upmost skill and passion. They are fast moving, exciting and extremely addictive. His main characters are all relatable, with strong personalities, which means you can’t help but fall in love with them.

Due to finish school shortly, Danny is expecting results that he can be proud of. This is a direct result of all of the hard work he has put in. This means that he has been given a place to study a BTEC in Creative Digital Media Production (which can equate to two or three A Levels). This course will give him the perfect grounding and understanding to really ensure that he has a thorough education in the art of script writing. Danny then hopes to go on to enter the exciting world of film script writing as a career.

Danny really is a inspirational young man and deserves the respect and admiration of anyone who has the privilege of meeting him. He has had to overcome numerous health issues, operations and obstacles just to be stood here today and yet his fearless determination has ensured that he really does have a bright future and all of his dreams will undoubtedly be achieved. He, truly, is writing his own future.