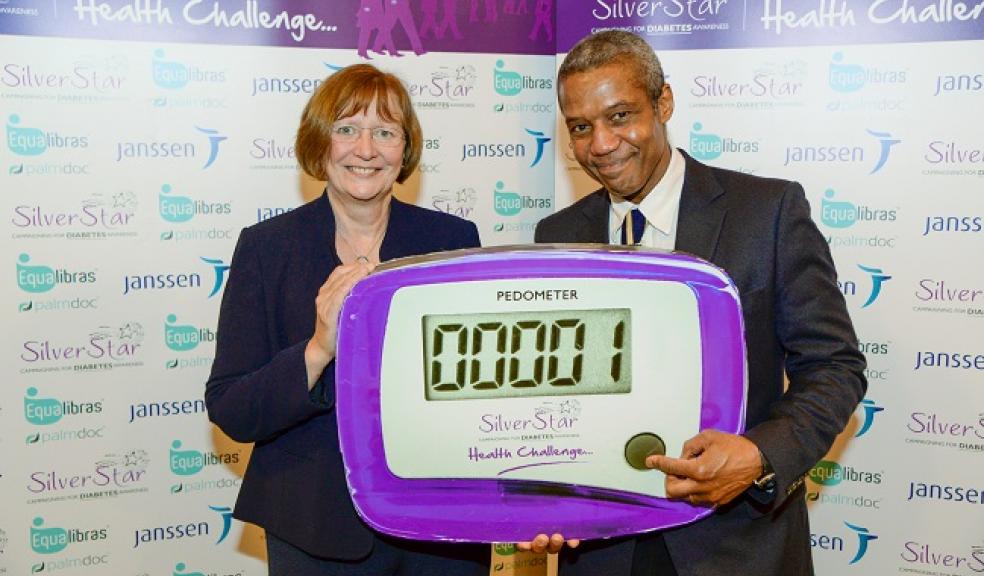 Alison Seabeck, MP for Plymouth Moor View, attended the Silver Star Diabetes Health Challenge, at the House of Commons last week. At the event Ms Seabeck took the quick and easy diabetes test to help raise awareness of the need for the public to test for the condition. Ms Seabeck met special guest Hugh Quarshie, who plays Dr. Ric Griffin in BBC’s Holby City and was joining in with raising awareness.

As part of the challenge, MPs were issued with a Pedometer that will measure the amount of steps taken on a chosen day until World Diabetes Day on 14th November 2014, to see who can take the most steps.

Silver Star Diabetes is a national charity which seeks to raise awareness of diabetes through advocacy and delivering free diabetes testing and lifestyle advice to the general public. The Charity runs Mobile Diabetes Units. These Units travel out into the community, to places of work, worship, community events, High Streets and retail parks, testing the public for free for diabetes and offering lifestyle advice. During these visits its staff have discovered thousands of people who have a propensity for diabetes that not know about it.

Alison Seabeck MP said: “A growing number of people in my constituency, including an increasing number of young people, are suffering from diabetes, so it is great that Silver Star Diabetes are taking action to raise awareness of the condition. Helping people to lead healthy lifestyles is important, and testing people for diabetes plays a vital step towards achieving that.

“I have been wearing my pedometer most days since I met Hugh Quarshie and the Silver Star team. The most steps I took was 11,000 on Saturday whilst I was out in the constituency knocking and doors and talking to people. Taking the challenge has really made me think about the need to be active each day and to maybe walk that extra set of stairs rather than take the lift each time. I hope more people will think about testing for diabetes and I was more than happy to raise awareness about the importance of testing in Plymouth."

Professor Jonathan Valabhji, National Clinical Director for Obesity and Diabetes at NHS England said: “Diabetes is one of the biggest health challenges we face today in the UK. There are 3.2 million people living with diabetes, the majority of whom have Type 2 diabetes, the onset of which can be prevented or delayed by a healthy lifestyle. Exercise is an important component of a healthy lifestyle, and I applaud Silver Star’s efforts to provide practical support and information to so many MPs who have decided to take the test and take the pedometer challenge to raise awareness of this health condition.