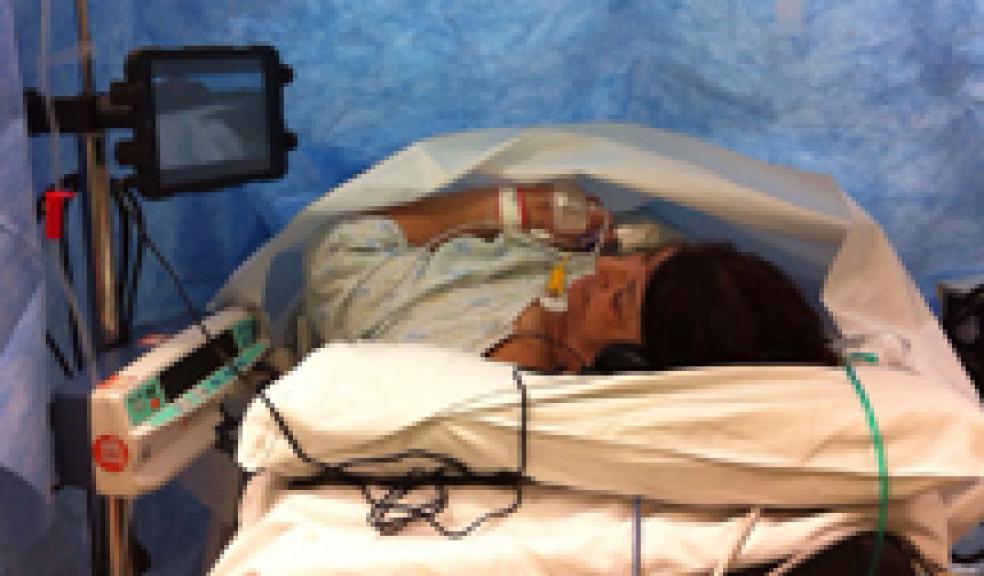 The first patient to choose distraction methods instead of sedation during surgery at Derriford Hospital is recovering well.

Janet Blank, 65 from Mountwise in Plymouth had a total knee replacement under spinal anaesthesia last Friday, while using a new ipad on loan from the South West Regional Anaesthesia Group as a distraction during the operation, rather than being sedated.

Dr Matt Oldman, Consultant Anaesthetist explains the benefits: “By avoiding sedating anaesthetic drugs during the procedure we can reduce side effects such as sickness, post-op drowsiness and confusion.

"Staying awake may also be a safer option for patients with certain medical conditions. Another added advantage is that the surgeon can communicate with the patient during the procedure.”

Dr Oldman continues: “The use of spinal anaesthetics for this type of surgery is not new but until now we have not had anything to offer our patients as a distraction and as a result many patients have opted to have sedation throughout the procedure to avoid hearing or seeing anything.

“Typically the procedures last between one and two hours, which is a long time to expect someone to lie still. But with the new ipads we can offer a choice of music, films and television using the Trust’s free wifi.”

Janet described the experience: “I heard everything, the hammer and drill but it didn’t bother me at all. I didn’t feel any pain and I actually watched the screen when they put the nerve block down my leg which was fascinating.

“I went to the recovery room after the operation and then straight up to the ward, I’d advise it to anyone.

“I didn’t actually watch TV as I prefer the radio so I asked to listen to BBC Devon, the Judi Spiers show, as she’s always good and makes me laugh.”

She continued: “I’m glad to get it over and done with, I’ve been in a lot of pain, and especially leading up to the operation but I won’t give in to it. It’s much better now. There is still some discomfort but not nearly as bad as it was.

“I was up and walking with a frame on Sunday and this morning I’ve been practising steps with the Physio.”

Janet is now looking forward to getting back to her busy role at a local care home and twice weekly gym classes and she has no doubt that her 18 grandchildren and ten great-grandchildren will keep her busy.

The South West Regional Anaesthesia Group (SOWRA) is a registered charity that promotes education and research in local anaesthesia and to improve the patient experience.