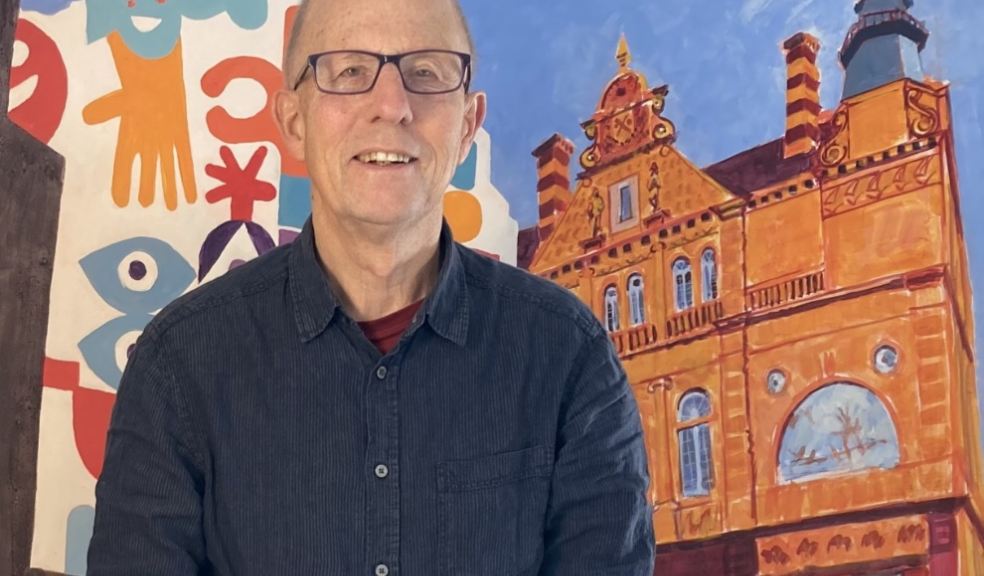 ‘Plymouth Exposed’ is on display in the TRP Gallery, on the first floor of the theatre until 2 April 2022.

Richard has been painting for more than 50 years. At art school in London, he worked on 7ft square abstract colour field paintings.

Richard is now an artist and illustrator, based in Plymouth and has two main areas of work. The first is all about his interest in regeneration projects.

He explains: “I’m fascinated by the process of change to buildings all around us. Much of this work is large scale drawing projects concerned with demolition and reconstruction – buildings partially there, the machinery being used and the superb new vistas opened up, often only temporarily. I am most interested in the process. When the building is completed, my fascination seems to disappear!”

The first of Richard’s many regeneration paintings around Plymouth was of the Theatre Royal being constructed in 1982.

All sorts of other themes around Plymouth have grabbed Richard’s attention over the years, from rotting hulks at Hooe Lake to allotments, and the Palace Theatre.

A recent series was of TRP’s Messenger statue being assembled in the South Yard and then installed outside the theatre.

The second area of Richard’s work involves subjects which fascinate him. He continues: “From boats, bridges, reflections and shadows to yellow road markings, allotments, gates, topiary and interesting buildings which aren’t going to be demolished but which just speak to us in a unique way.”

In addition to Richard’s exhibition at TRP, there is a chance for you to propose your own idea, to inspire his next piece of work. It is called ‘YOUR Plymouth Exposed’, and Richard is looking for a place or building in Plymouth, that you either love or hate, which he will paint.

Proposals can be dropped in to the theatre or by emailing viewfinder@theatreroyal.com along with an explanation as to why you chose it.

On 14 January, TRP will select a quirky suggestion with a special back story to energise Richard to start work on the painting. It will then be added to the exhibition on 1 February 2022, before TRP and Richard present the work to the winner at the end of the exhibition.