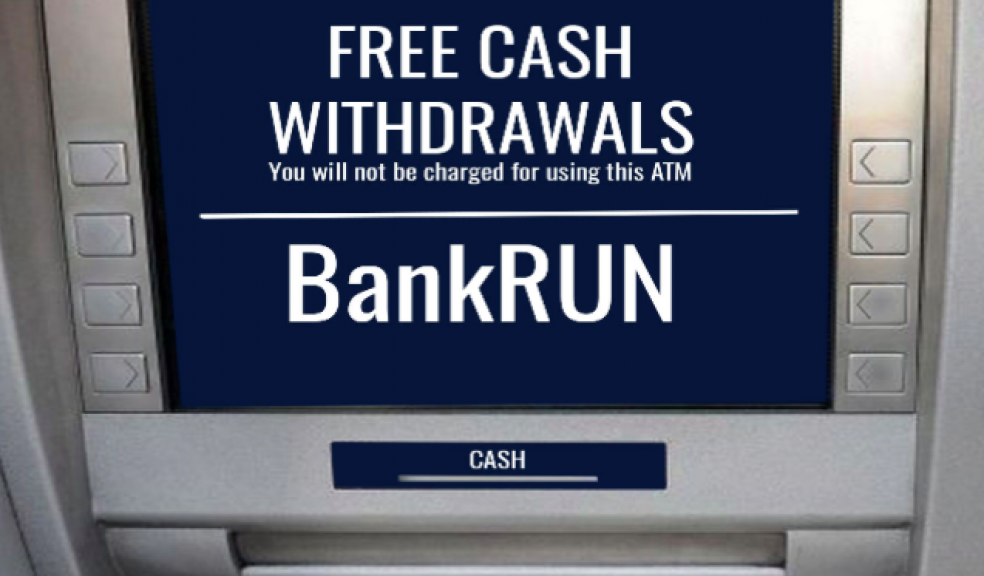 Where does money come from?  How is its creation regulated?  And why is it that the only institutions with the legal power to create money from nothing - the banks - need subsidising?

On Saturday 23rd & Sunday 24th September, as part of the Plymouth Art Weekender, artist Lara Luna Bartley will mark 10 years (and one week) since Northern Rock suffered a bank run by hand printing a limited edition of 200 'banknotes' and distributing them from a free standing 'cash machine' in Plymouth's city centre.

The 'banknotes' will feature one of three radical economic thinkers : David Graeber, Ann Petiffor, and Ben Dyson, whose writings and online talks have informed and influenced BankRUN.

Free Money & Making Sense of it all

“When I studied economics I found little truth in anything I was taught. Ridiculously, a few months prior to the bank run on Northern Rock, I sat a module on the systems we have in place to ensure a bank run could never happen. It did.

We need radical new ways to understand money and our monetary system if we are to transition out of the crises that has brought us years of austerity politics.

Come and take part in this exploratory piece, get yourself some free ‘cash’, and let’s try and make sense of what money is.” - Lara Luna Bartley

David Graeber, in his book 'Debt : The first 500 years', reveals that spiralling debt is a common feature of credit based economies, in which money is a promise rather that a piece of gold or silver. Historically these periods have seen the creation of institutions designed to protect debtors, such as the ancient middle Eastern jubilees and debt cancellation. But, what we have seen since entering the latest period of credit money - when Nixon let go of the gold standard in 1971 - is the exact opposite: the creation of powerful institutions including the IMF designed to protect creditors.

Ann Pettifor, director of the think tank Policy Research in Macroeconomics (PRIME), has campaigned for 3rd world debt cancellation alongside Graeber. Her most recent book 'The Production of Money: How to Break the Power of Bankers' looks at how, despite the determined efforts of central banks to pump 500 billion dollars every quarter into the private financial system, the failure of governments to restructure these global banks means they are still essentially insolvent. Pettifor points out that unlike meteorologists who warn us about storms, or aeronautical engineers who keep us flying safe, economists take no responsibility for predicting or averting economic crisis.

Ben Dyson, head of research at Positive Money between 2010 – 2016, has been a strong advocate of taking back control of the production of money. In 'Modernising Money: Why Our Monetary System is Broken and How it Can be Fixed' which he co-authored, he identifies a slip in the legislation of the Bank Charter Act 1844 as the root of our current problems. The Act was passed as a response to high inflation caused by provincial banks issuing too many banknotes and gave the Bank of England a monopoly on the creation of banknotes, but it allowed commercial banks the power to continue to create money in the form of bank deposits - sums of money created from nowhere and placed into customers accounts as bank loans. Today, 95%-97% of money is created in this way and it is fueling the ongoing housing price bubble.

Many believe we failed to deal with the problems which led to the economic crisis of 2007-2008, and that the next crash won’t be far off. Now is the time to learn as much as we can about the banking system and the production of money, so we can make sure the changes necessary for a stable and prosperous economy are implemented. Theresa May may try to convince us “there is no magic money tree”, but in fact there is, and it is up to us to decide how it grows, who gets to harvest it and what we do with the money.

This creative intervention is one of a host of events taking place as part of the Plymouth Art Weekender, and will be found on Armada Way in the centre of Plymouth on the 23nd and 24th of September.

Who? For anyone (limited to 200 transactions)
What? BankRUN Participatory Intervention
When? 10am - 5pm Saturday 23rd & Sunday 24th September
Where? Armada Way, Plymouth, PL1