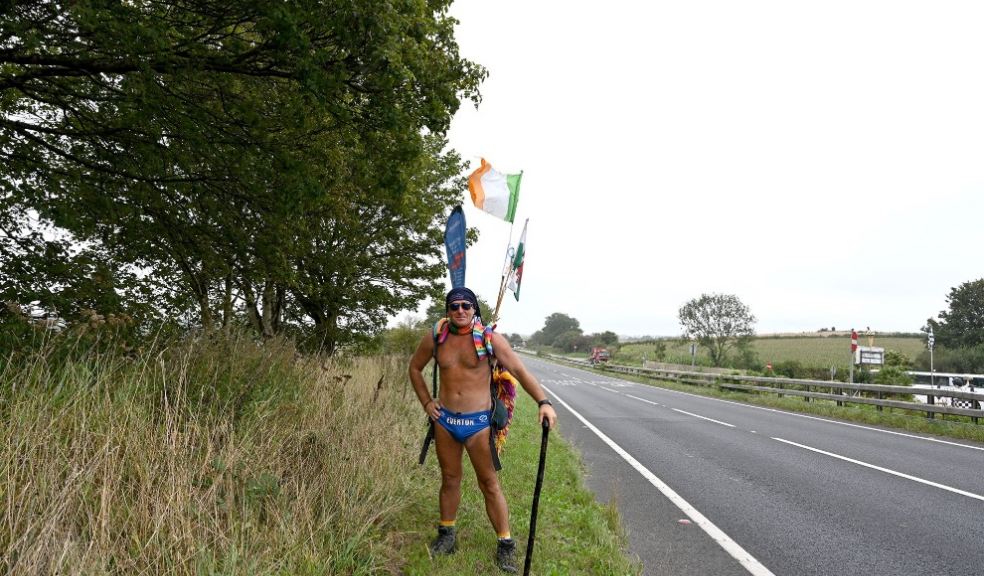 Britain’s most celebrated charity fundraiser, SpeedoMick, is back on the road again on his 2,000 mile ‘Giving Back Tour’. In his trusty speedos, Mick is currently halfway through his six-month trek around the UK and Ireland, raising funds for the SpeedoMick Foundation and finding charities to donate up to £250,000 to along the way.

Mick Cullen (SpeedoMick) set up The SpeedoMick Foundation as a registered charity in 2020, following the success of his 1,000 mile walk in 2019 - which raised over £500,000 and spanned across 30 towns and cities. From John O’Groats to Lands End, Mick braved storms Ciara and Denis, sledged down Scottish mountains and brought cheer to thousands of people across the UK and beyond.

The ‘Giving Back Tour’ will cover over a total of 2,400 miles and over 190 days of walking, taking in all five capital cities. Having commenced in Stornoway in the Western Isles in May, SpeedoMick’s ‘Giving Back Tour’ has already travelled through Edinburgh and Glasgow, before heading to Belfast, Dublin and crossing back over to North Wales ahead of journeying to Cardiff.

The last leg of the tour is set to continue through all of England’s major cities, before making its way to Manchester and finally finishing in Liverpool this December.

Since swimming the Channel in 2014, SpeedoMick has made a number of TV appearances. As well as being awarded the British Pride of Sports Award, Mick has also been named Liverpool Echo Community Person of the Year, Everton FC Fan of the Year, Liverpool Citizen of Honour and given a British Citizenship Award. SpeedoMick has also been included in the Independent’s Happy List of 2021 - among 50 of the most inspirational people driving positive change in Britain.

The SpeedoMick Foundation is supported by a respected board of trustees and celebrity ambassadors, such as actor David Morrisey, TV presenter Alex Brooker and singer Liz McClarnon and has helped a number of good causes focussed on mental health, homelessness and the development of disadvantaged young people.

The Foundation seeks to help people talk in confidence about their doubts and fears. Through compassion and understanding, the charity sets out to make a positive impact to families, individuals and communities.

Speedo Mick said: “The reason I’m doing the tour is to ‘give back’ to the people and the communities who have supported me in the past.

The Covid-19 pandemic has placed a huge strain on the finances of so many charities and has shone a light on how difficult life can be for a lot of young people in the country - whether it be a lack of food, money or opportunities. So, I’ll do anything I can to help.”

Having been through such struggles himself, homelessness and mental health issues in disadvantaged young people are issues that are very close to Mick’s heart. For many years, Mick had been in need of the help and support that he and his team are able to offer today. He has overcome a number of addictions and living challenges, but there was a time when he couldn’t see a way out.

“I know how hard it is to come out on the other side. In my life, I’ve been in some dark, lonely, hopeless places. For me, one of the most rewarding parts of my fundraising has been to help people facing what I have faced.”

SpeedoMick hopes that his Foundation will help people to change their lives and show them the right direction. Passionate and persevering, he now feels he has the experience and understanding that a person might need in their formative or younger years.

For more information or to follow the ‘Giving Back Tour’, please visit: https://www.thespeedomickfoundation.org/