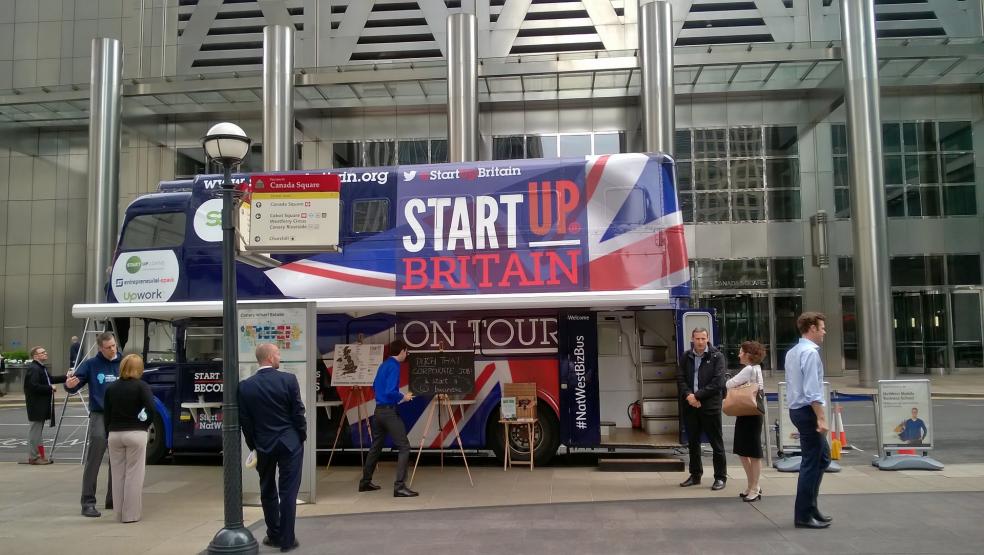 Following a high­profile Downing Street launch, national enterprise campaign StartUp Britain has hit the road and arrives in Plymouth today on the way to helping the number of UK businesses started in 2015 to reach a record 600,000.

At last month’s launch, surrounded by entrepreneurs, David Cameron announced that the target set for the government­backed Start Up Loans company three years ago of awarding 30,000 loans to entrepreneurs by 2015 has been achieved. 138 loans, worth £914,000 have been made to individuals in Plymouth and 2,243 loans, worth £11.94 million, to people across the South­West during this period.

For a fourth year, the campaign is touring Britain with a bus full of start­up experts and champions, to provide inspiration and support to tens of thousands of aspiring entrepreneurs. As one of 25 stops across the country, the bus will be parked in The Piazza from 10am to 4pm on Monday 20th July.

Joining leading small business software company Sage as a headline sponsor of the tour, RBS is providing its iconic 1966 Routemaster bus, the N​atWest Mobile Business School,​wrapped with campaign branding to catch the eyes of passers­by on the high street and on the open road.

Government­backed Start Up Loans Company and Upwork ­ the world leader in online work ­ are also supporters. On board, the sponsors will be giving one­to­one advice to aspiring and early­stage entrepreneurs, while local providers of business support such as Plymouth University’s Formation Zone w​ill offer mentoring and local guidance.

The tour’s national partners include FSB, British Chambers of Commerce and UKTI, which recently launched the First Time Exporters Initiative to provide advice and support to help companies expand into international markets.

The bus will have made stops at Canary Wharf, in Birmingham’s Centenary Square and Manchester’s Piccadilly Gardens on its way to Plymouth and will go on to visit Edinburgh, Inverness, Brighton and Margate among other destinations.
  
StartUp Britain director, Matt Smith said: “​Since StartUp Britain launched in 2011 we have seen record breaking numbers of people each year starting businesses, showing that the entrepreneurial spirit within Britain continues to grow.

By parking the bus in town squares across the country, we want to give people the confidence and inspiration to turn their business ideas into reality”.