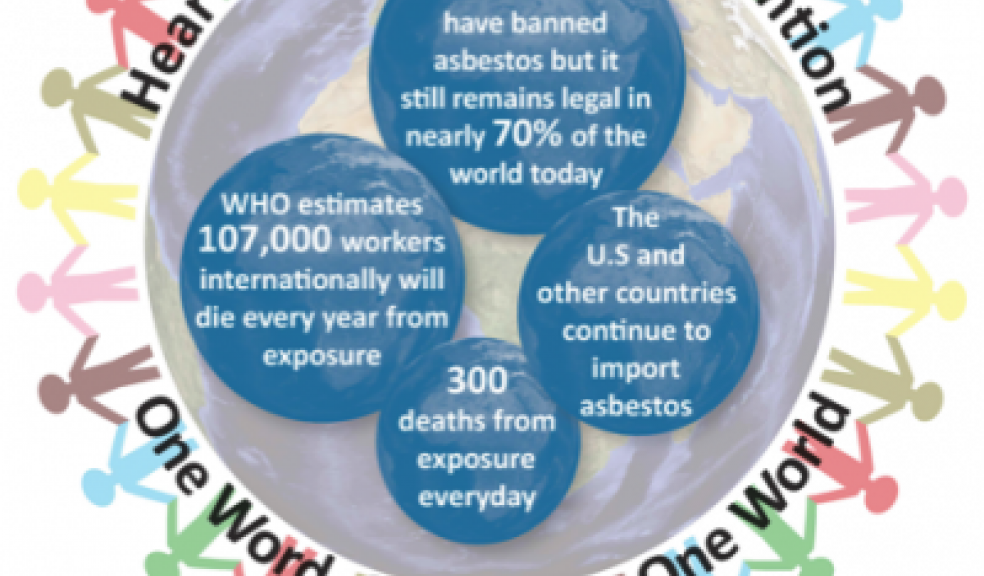 The first week of April is Global Asbestos Awareness Week. This is a campaign by the Asbestos Disease Awareness Organisation (ADAO) which is the largest independent asbestos victims’ organisation in the United States. Its aims and objectives are to give victims a united voice, to educate and raise awareness and to push for a global asbestos ban.

This year’s campaign will translate across six different languages, spreading the message to a wide international audience. It will focus on;

• Banning the mining, manufacturing and use of asbestos
• Preventing asbestos exposure through education and awareness
• Increasing compliance and enforcement of existing laws and regulations.

Each day will feature an ambassador with some type of connection to asbestos exposure or asbestos-related diseases. Full details of events can be found on ADAO’s website www.asbestosdiseaseawareness.org. It will also be trending on Twitter using the hashtag #2017GAAW

Asbestos is the name given to a group of minerals that occur naturally in the environment as bundles of fibres that can be separated into thin, durable threads. These fibres are resistant to heat, fire, and chemicals and do not conduct electricity.
The three main types of asbestos still present today are 'blue asbestos' (crocidolite), 'brown asbestos' (amosite) and the most common form 'white asbestos' (chrysotile). They differ in their chemical compositions, but all are classed as carcinogenic. There is no safe level of exposure.

Blue and brown asbestos have not been imported into the UK since 1985, however, white asbestos continued to be widely used in many industries until it was banned in 1999. Whilst it is now illegal to use asbestos in the construction or refurbishment of any premises in the UK, many thousands of tonnes of it were used in the past and much of it is still in place. Any property built before the year 2000 can still contain it. It is estimated that asbestos is present in 90% of all public sector housing and schools, as well as domestic properties.

As long as asbestos is in good condition and not in a position to be disturbed or damaged, there is a very small risk to health. However when this is not the case asbestos fibres are released into the air and people breathe them in. This can lead to asbestos-related diseases such as the terminal cancer mesothelioma, plus pleural thickening, pleural plaques, asbestosis and lung cancer.

Although asbestos is regulated in the United States, many people are surprised to learn that it is not fully banned. The same is true for countries like China, India, Mexico, and Russia. As of 2015, 55 nations had banned the use of all types of asbestos, however, roughly 140 nations around the world still permit full or partial use of asbestos, with little or no regulations at all.

The World Health Organisation estimates that currently about 125 million people in the world are exposed to asbestos at the workplace with potentially life threatening consequences. Additionally 107,000 workers internationally will die every year from exposure.

Asbestos is still the UK’s biggest industrial killer. We possess one of the highest rates of mesothelioma in the world, largely because the UK government permitted the use of asbestos long after other countries outlawed the mineral’s use.

According to the Health and Safety Executive, asbestos is responsible for over 5,000 deaths a year in the UK which is more than the number of people killed on the road. Around 20 tradesmen die each week as a result of past exposure. It is unfortunately all too common that workers who have been exposed to asbestos typically put their symptoms down to natural aging as these symptoms can take between 20 and 50 years to present themselves.

The use of asbestos in Plymouth and the South West was widespread between the 1950s and the 1970s, with the local Dockyard being one of the main offenders. Most of the people that worked in the Dockyard during this period were exposed to asbestos, some without even knowing it. Sadly a substantial number of people within the South West have already been diagnosed with pleural plaques which confirms beyond any doubt the large scale presence of asbestos within the Dockyard in the past.

Worryingly, 9 out of 10 UK schools still contain large amounts of the deadly material. This means 7 million children are exposed to the potential dangers of asbestos daily. Cancer experts at the Department of Health have found that a 5 year old is five times more vulnerable to developing mesothelioma than a 30 year old. This makes them particularly vulnerable to asbestos in their classrooms. Teachers have also been hard hit - more than 224 school teachers in England have died of mesothelioma.

The devastating health issues and diseases caused from exposure to asbestos represent a significant cost to society and an unbelievably painful experience for the individuals and families affected.

Anyone exposed to asbestos in the past (or believe they might have been) and is suffering from a cough that has lasted more than three weeks, shortness of breath, chest, back pain, shoulder pain, weight loss or abdominal pain, should see their GP as a matter of priority and mention their past history. An Xray should subsequently be arranged.

The South West Mesothelioma Group provides professional and peer support for patients and their families who have been affected by mesothelioma or other asbestos related diseases. We hold monthly meetings in Plymouth and Truro. This is a chance to meet patients and carers who understand what each other are going through and also share more about the conditions and the help that is available. The group also fund raises and spreads awareness throughout the region.

Further information about the support group, meetings and events can be found on Facebook (SouthWestMesotheliomaSupportGroup) or Twitter @SWMesoSupport. Alternatively please contact Christine Jones (Mesothelioma Clinical Nurse Specialist for the South West) on 01752 763665 or email christine.paterson4@nhs.net.

Anyone who has any concerns about the possible presence of asbestos in their home should seek advice from a trained and licensed professional before commencing any refurbishments or DIY. Alternatively visit the Health and Safety Executive Website for more information. Those concerned about asbestos exposure in the workplace should discuss the situation with other employees, their health and safety representative and their employers. If you are a parent, teacher or ancillary staff and concerned about the presence of asbestos in your school, please request to see the school’s asbestos survey and management plan. By law you should be informed of the whereabouts of any asbestos that might be prone to damage as a matter of fact, however, this is not always the case.

Asbestos is a hidden killer so it should be treated with respect, however, please remember that mesothelioma and other asbestos related diseases are totally preventable. Don’t become another statistic. Take time this week to make yourself aware of the serious health risks associated with asbestos and also tell your family and friends. It might just save your life or that of someone else you love.