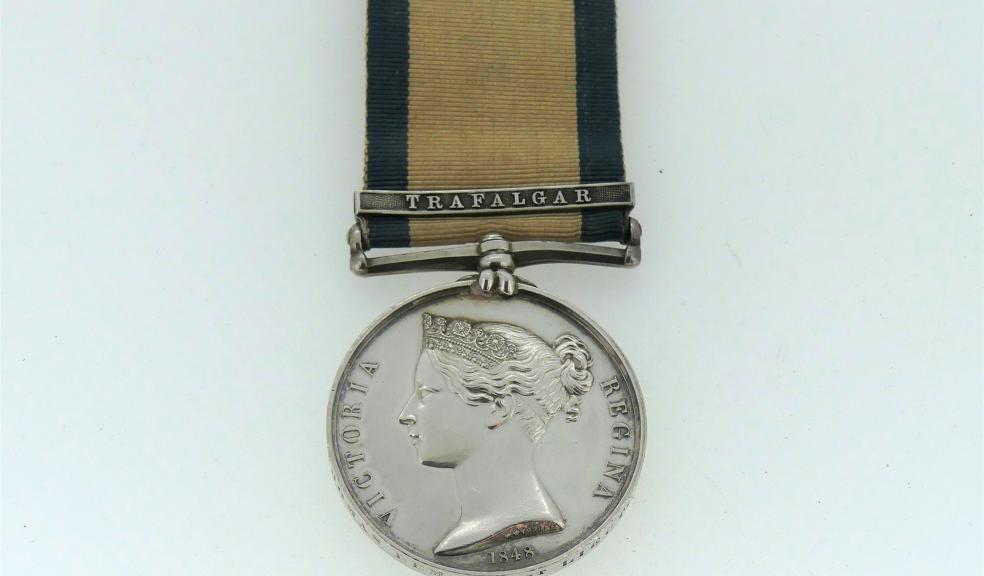 A medal awarded for service during the Battle of Trafalgar is to be auctioned for the first time in Chilcotts Auctioneers’ July sale which also features other important medals.

The Naval General Service Medal (NGSM) with Trafalgar clasp from 1847 was bestowed on Thomas Lemon, a 1st Lieutenant with the Royal Marines who served on the HMS Dreadnought in the Battle of Trafalgar in 1805.

The role of Royal Marines at the time of the Battle of Trafalgar ranged from guard and sentry duties to being sharpshooters on the rigging, targeting individuals on the opposing ship. The RM were also always the first line of attack when attempting to board an enemy ship.

Thomas Lemon would have been one of only a handful of Royal Marine officers on board the Dreadnought, which joined the Battle of Trafalgar under the command of Captain John Conn joined the battle and forced the surrender of the Spanish shop San Juan Nepomuceno.

NGSM were only approved in 1847 and recipients had to claim them; they were awarded for naval actions between 1793 and 1840, with the specific campaign represented by a clasp on the ribbon.

Auctioneer Duncan Chilcott said: “This is a rare medal to come to market for the first time, over 170 years after it was awarded. We estimate the sale value to be between £7,000 and £9,000, but it could go much higher because of its rarity.

“Honiton has a connection with the Battle of Trafalgar as the town is located on the Trafalgar Way, the route followed by Lieutenant John Richards Lapenotiere when he rode to London taking news of the victory and Nelson’s death to Parliament. He would have passed right by what is now our sale room.”

Also of interest in the sale are two Army of India medals with the Ava clasp, dated 1851. One was awarded to John Thurston of Deal, Kent who served as Gunners Crew on HMS Alligator which is estimated at between £1,200 and £1,400. The other was awarded to Lt. Augustus Ormsby and is valued at £800 to £1,000.

It’s likely that Augustus came from the same family as William Ormsby whose two medals are also in the auction: an Army of India Medal, 1851, with Ava and Bhurtpoor clasps and Sutlej Medal, 1846, with Sobraon clasp. William was a true military man; he took part in the first Burma War in Arakan in 1825; the siege of Bharatpur in 1825 and the First Sikh War at Ferozhahr and Sobraon in 1846. He retired in 1855 and died in Plymouth aged 70 in 1875. These medals are estimated at between £2,000 and £2,600.

The medals will be auctioned at Chilcotts’ Dolphin Saleroom in Honiton High Street on July 17. They can be viewed in the week prior to the sale, which starts promptly at 10am; online bidding will be available. For more details contact 01404 47783 or visit www.chilcottsauctions.co.uk