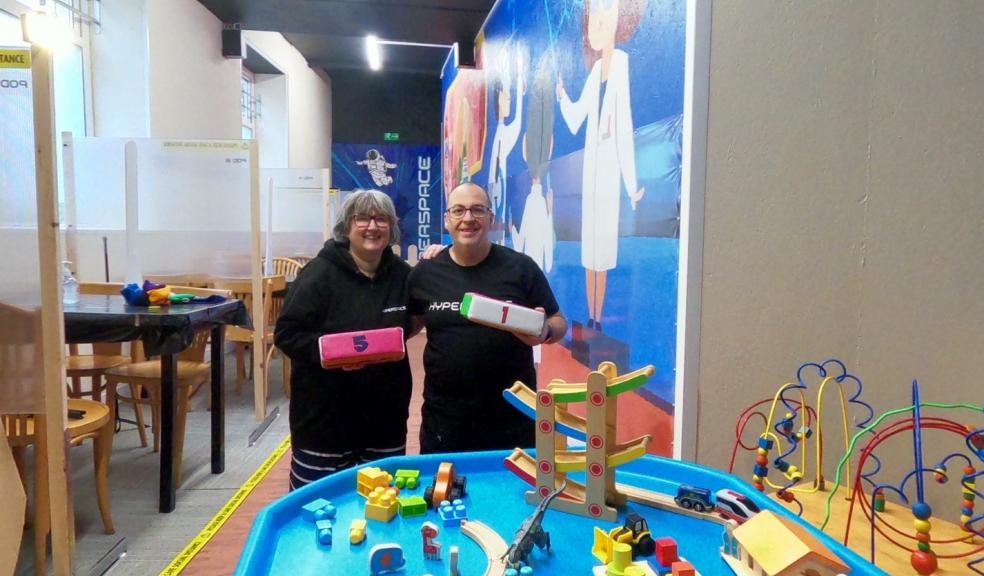 Environmental Health has instructed a new parent and toddler group to close during lockdown2, three days after saying it could stay open. Hyperspace in Paignton, Devon, had two visits within three days from the Environmental Health Team. After the second visit, Hyperspace founders Mike and Lesley Morrison were told to shut because they had soft play at the premises and all soft play was banned. This equipment is easy to clean and no different from many schools and nurseries.

Mike and Lesley have gone to great lengths to ensure Hyperspace is Covid-secure and fully complied with industry requirements. There is ventilation above and beyond what is required, and air quality is monitored hourly. There are sanitisation stations on every table. All toys, equipment and surfaces can be easily cleaned, and social distancing measures have been implemented.

Mike and Lesley acquired the premises during the first lockdown and have invested a significant amount of money turning what was a near derelict site into a safe place that enables hands-on play and physical learning. It has been their vision to create a café and play area that enables learning and personal growth in pre-school children.  Under Covid-19 restrictions, they knew that a play café would not be allowed to open, so changed the way they worked that of to a Parent and Toddler group, closely following the Early Years Alliance and government guidelines.

Hyperspace is also a place where parents can meet other parents in a supportive, friendly environment. This is vital, particularly for new parents, at a time when opportunities to socialise are very limited.

There has been widespread recognition since the Covid-19 pandemic began that peoples’ mental health is important, particularly when lockdown restrictions are in place. In the second UK lockdown, the UK government, in conjunction with the Early Years Alliance, acknowledged the importance of pre-school education for toddlers and the importance of parental peer support. As a result, they encouraged parent and toddler groups to stay open and operate safely if they could do so.

“Parents of young children have a difficult enough time under normal circumstances, and sometimes a session to a baby and toddler group is the only time a young mother or father has to chat to other parents in a relaxed environment,” says Lesley. “One mother who came to our group before we were shut down said that their baby was born after March and these were the first children they had ever been with. Another mother was almost in tears saying she did not know what to do now as she was “climbing the walls” at home alone with her children in their small flat.”

Hyperspace had been open for just three days when the second lockdown was announced. Mike and Lesley checked the guidance and were satisfied that they complied with all the restrictions on parent and toddler groups, so remained open until instructed to close. Mike says they take the current stipulations regarding Covid-19 very seriously and that Hyperspace meets what is required. “In my voluntary work, I have been involved in infection control for almost 20 years, and would never take unnecessary risks with our staff or customers as this challenging time,” he says.

Mike is an HR professional, was a volunteer trainer for Red Cross for over 30 years and was been a technical adviser to the BBC and Channel 4 for three Infection Control documentaries. Lesley is currently an NHS employee, but trained to be an NNEB nursery nurse in the 1980s, has worked in many schools and private nurseries and has run her own play groups and crèches for secondary schools and adult education centres.

When Environmental Health shut Hyperspace down, it made no references or allowances for the early years educational environment, nor did it recognise the advice for early years parent and toddler groups as set out by the Government and Early Years Alliance.

Mike says the reasons given for closure would cause all under 10-year-old educational facilities that did any physical education to close. “For example, no soft matting!”  He thinks there needs to be clearer communication between Environmental Health and early years educational departments and that guidance is adhered to, not just by providers like Hyperspace, but also bodies such as Environmental Health.

“If the UK government wants parent and toddler groups to operate, they need to inform Environmental Health that they can do so and that other than limitations clearly listed in the guidance, there should be no artificial decisions made on hearsay and not on scientific evidence,” says Mike.