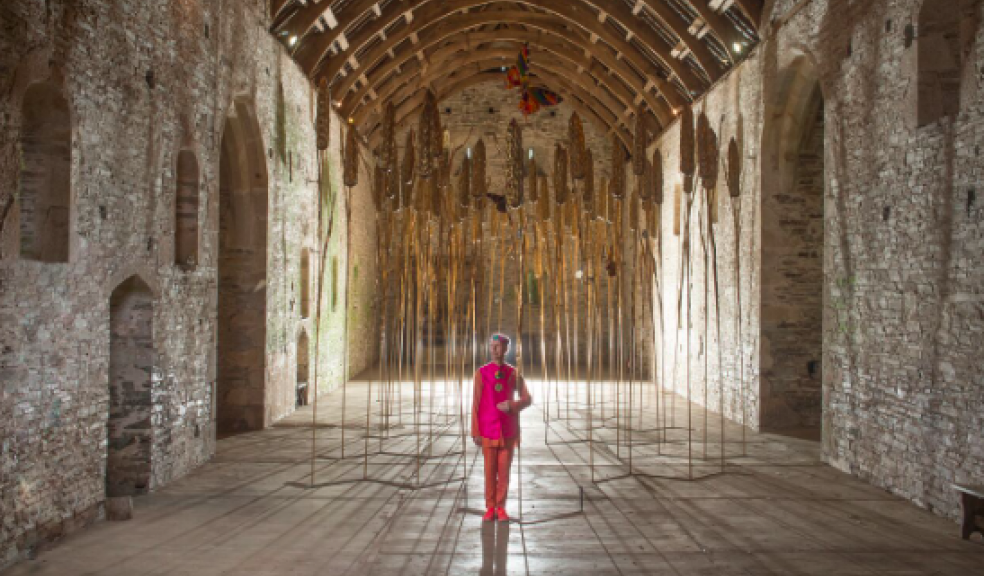 Over the last year, Buckland Abbey has hosted a major exhibition of contemporary art by the renowned sculptor Andrew Logan, one of the largest ever staged by the National Trust in collaboration with one artist.

The ‘Art of reflection’ will have its final farewell viewing on Sunday 4 February. A special guided tour at 1pm will mark the occasion and is free for National Trust members. The tour will show the history and spirit of Buckland reflected in 18 sculptures placed in various locations around the Abbey and gardens. The works have not only stimulated conversations about modern art viewed in a historical setting but have also enabled staff and visitors to tell the Abby’s story in a different way.

Awe inspiring installations such as the returning Goldfield, will fill the Great Barn with 4.5 metre high wheat stalks, field mice and floating butterflies. There’s also the magical glass Excalibur rising out of the historic Cart Pond and the ornamental Elements and Universe thrones, used by the winners of the Alternative Miss World competition, in the Great Hall.

Other highlights include World of Smiles, a hanging globe echoing Drake's circumnavigation of the world; Life and Oomph, a life sized sculpture of Royal Ballet principal ballerina Lynn Seymour which has never previously been exhibited; and Four Flowers of the Apocalypse which are displayed in a glass house in the garden.

‘As soon as I saw a photograph of Goldfield, I knew Andrew was the man for us and there’s something very moving about having the barn full of wheat again. When Andrew came here he just understood the place immediately – its relationship with the surrounding landscape and the sense of spirituality which brought the Cistercian monks here in the 13th century and has drawn people ever since. It’s a very special place.’

The exhibition will host a final flourish for its final two weeks with the arrival of the Cosmic Egg on 19 February. Keep an eye on social media and the Buckland Abbey website for more details.