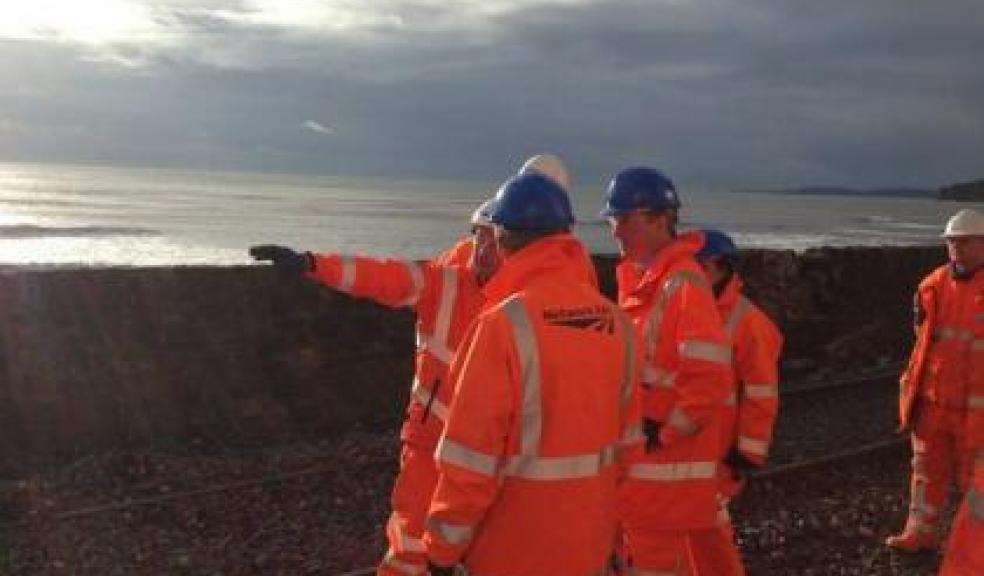 Prime Minister, David Cameron, has today visited the destroyed track near Dawlish as part of his tour of the storm damage in the South West.

Mr Cameron met with the repair force from Network Rail and thanked railway staff for their work to retain service via replacement bus and alternative travel schemes.

At meeting with Rail operators First Great Western Mr Cameron tweeted “Hearing how @FGW are keeping the SW #openforbusiness. We will look at possible alternatives to the Dawlish rail route.”

The Prime Minister later met with local volunteers accompanied by Anne Marie Morris MP for Newton Abbot and discussed the travel problems caused by the storms where he pledged to look into the need for more replacement buses in the area.

Yesterday Mr Cameron met with by Plymouth City Council’s Chief Executive Tracey Lee and Chief Executive of Plymouth’s Chamber of Commerce David Parlby,
At the private meeting, the Prime Minister promised a study of all the options to create an additional, fast 21st century resilient rail route, including an inland route behind Dawlish that was on a par with the rest of the UK.

The Prime Minister also promised to address the key issues raised in a letter from all the South West local authorities calling for more help from the government.

Among other commitments, Mr Cameron promised he would urgently clarify where the £31.3 million of rail investment funding was being spent.

The funding promised after storm damage in 2012 closed the coastal line in winter 2012/13 was expected to be granted earlier this year but has yet to be received by the region.

Mr Cameron also committed to see if the repairs to the Dawlish seawall and track could be speeded up and ensure that the best possible temporary services were inn place.

David Parlby said: “It was a very useful and encouraging meeting. The Prime Minister took on board not just the immediate action needed, but how important it is for us to get the message out that despite these issues, we are open for business both now and in the long term.”

Chief Executive Tracey Lee added: “Now is the time for bold action not half measures. I explained that a car journey to Exeter takes 40 minutes, yet the trains, when they operate, take an hour – and any route via Okehampton would take much longer.

“A fast, resilient rail service fit for the 21st century needs to address this once and for all.”

Mr Cameron will now return to Number 10 this and is expected to update the county with the latest plan of action later this afternoon.