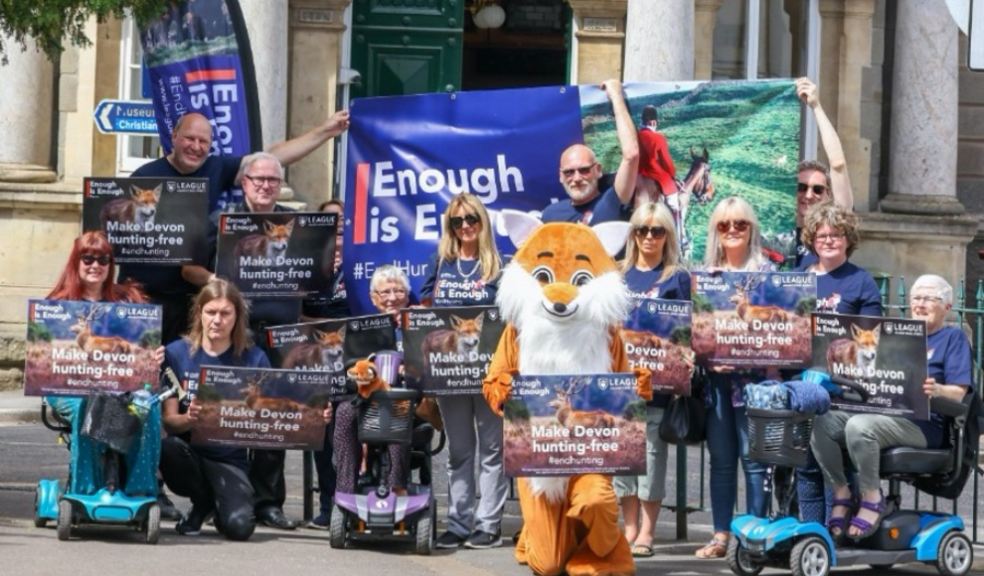 Campaigners from leading animal welfare charity the League Against Cruel Sports were in Tiverton last week calling on the public and Devon’s politicians to back a campaign to make Devon hunting free.

They spoke to local residents and shoppers outside the historic Tiverton Town Hall and on Fore Street to raise awareness that even though hunting was banned 17 years ago, the so-called ‘sport’ still goes on today.

Nick Weston, head of campaigns at the League Against Cruel Sports, said: “Fox hunting and deer hunting are still shamefully going on across the county and involving the cruel pursuit and death of native wildlife, and enough is enough.

“It’s time for politicians to step in and strengthen the Hunting Act which will end these barbaric activities once and for all – something the vast majority of the public wants to see.”

A fox and deer hunting ban outlawed hunting with dogs in England and Wales in 2005 but Devon remains a hunting hotspot. For the last full hunting season before the Covid-19 pandemic, between November 2019 and March 2020, the League received reports of 38 foxes being killed by hunts in England and Wales. Four of those reports were related to hunts in Devon.

Last year one of hunting’s top bosses, Mark Hankinson, was convicted of intentionally encouraging or assisting others to commit an offence under the Hunting Act 2004. He was found guilty of by telling more than 100 assembled huntsmen how to use the “smokescreen” of trail hunting to get away with hunting real animals.

The judge in the case dismissed trail hunting, the excuse often used by hunts, as a “cover for old fashioned illegal hunting” and a “sham” and a “fiction”.

The League was joined today by local animal welfare campaigners who are looking to ban the annual fox hunt meet in Tiverton on Boxing Day.

Nick Weston added: “People across Devon are telling us that they are horrified by the activities of the hunts.

“It’s time for politicians in the county to pledge to help make Devon hunting free.”