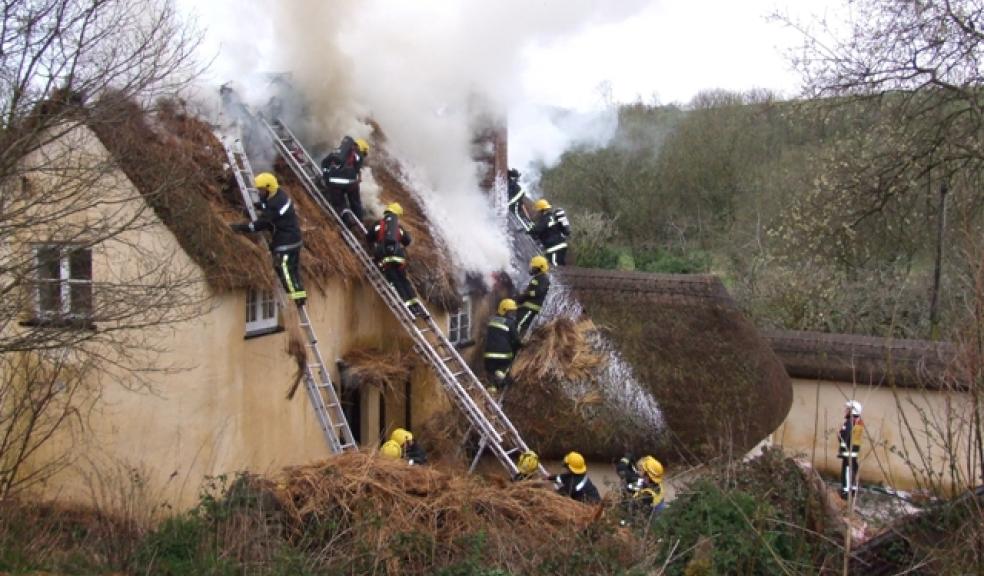 As the days start to get warmer, but the nights can still be cold, Devon & Somerset Fire & Rescue Service remind you to make sure your chimneys are safe and secure as possible, especially when lighting up fires that haven't been used for a while.

Marc House, Community Safety Prevention Manager explains: “Fire in a thatched roof is difficult to detect and once started is difficult to control. Once a fire has taken hold within a roof it will spread rapidly, due to the very nature of how thatch burns; and often the results are devastating!

“A thatched home can be ruined not only by the fire but by the amount of water needed to put it out, within an ancient cottage water can dissolve old cobb walls as well as causing serious water damage throughout.

“To keep yourself and your family safe from fire you should take care to have your chimney swept regularly, depending upon what fuel you burn. If the worst should happen, a smoke alarm can give you the extra time you need to escape in a house fire – make sure you test yours regularly.”

Fire in a thatch is not an inevitable occurrence but it is an organic material, subject to different behaviour patterns depending on its surroundings, treatments and choice of materials or styles. It has a finite life span, measured in tens rather than hundreds of years. And above all it is combustible.

Modern enclosed solid fuel appliances are designed to burn efficiently and cleanly, often flues pass through old chimneys, where there is only a four-inch thickness of brick, which makes the thatch especially vulnerable to the risk of heat build-up and eventually combustion at a point between the brick and the thatch.

The danger zone for heat transfer and where a fire may start in a thatch is more associated with older and/or listed properties with any two or more of the conditions highlighted below:

• A deep multi-layer thatch where the thatch is over one metre deep–a guide to the depth of thatch can be assessed in relation to the level of visible chimney
• Originally chimney height would have been about two metres from the ridge.
• Regular use of a multi-fuel or wood burning stove or an open fire with an inappropriate, old or poorly fitted liner
• Central chimney surrounded by thatch or a house that is part of a terrace
• Electrical faults and careless workmen, any recessed halogen spot lights, those particularity in bedroom or bathroom ceilings
• Security Lights - situated too close to the eaves.  Any outside lights, particularly those fitted with motion sensors should be installed at least 1 metre away from any thatch
• Discarded cigarettes and garden bonfires
• Television aerials on thatched buildings should be fitted to a freestanding pole. Where this is not possible, the aerial should be fixed to a gable or gable-end chimney, where the cable can be run down the wall, avoiding contact with the thatch. Disconnect your television aerial during electrical storms to prevent damage to the system

The increased efficiency of such stoves, whilst very welcome to residents of otherwise draughty older properties, has its own implications with regard to fire risk. Such efficiency depends on a high flue gas temperature of around 500°C which is concentrated in a narrow air column. When installed in a properly regulated, modern chimney this type of system is a highly effective way of getting maximum heat out of burning wood; but where ancient chimney stacks are concerned, the inappropriate introduction of such installations, with metal liners can create serious problems.

Research carried out in the1990s indicates that in a single-skinned brick chimney, heat can migrate into the deep thatch surrounding the stack and needs only to reach 200°C for charring of the thatch in contact to commence.
While this may not happen immediately, it must be remembered that the process of lighting and extinguishing the stove takes place on a regular basis year in, year out and because of the excellent insulating properties thatch the temperature does not drop to ambient in between lighting and extinguishing the stove.

If the use of such stoves is to be contemplated in an old thatched house, it is essential that a concrete of pumice insulated liner be inserted to isolate the hot gases from the surrounding brickwork. It is also essential that such lining is carried out by a properly qualified installer to ensure that it runs centrally without coming into contact with the chimney interior, that there are no gaps in concrete segment liners and that it runs the entire length of the stack. The most popular of liners is either flexible metal or of a double skin metal construction, this type of liner is not recommended, the void around the pipe work must be backfilled with the recommended insulation material to avoid intense heat bridging the gap.

Traditionally, combed wheat reed and long straw thatch is repaired or maintained by fixing new coats over older layers, in Devon water reed thatch can also be spar coated in a manner similar to combed wheat reed. The depth of thatch increases over the years, and where the thatch abuts the chimney can easily reach depths of 1-2 metres. In this way, a considerable surface area builds up against the chimney making the thatch more vulnerable.

It is the combination of deep thatch and a central chimney in conjunction with the use of multi-fuel stoves that put properties most at risk.

If in doubt, ask and don’t use any chimney related appliance until you are sure it is safe!