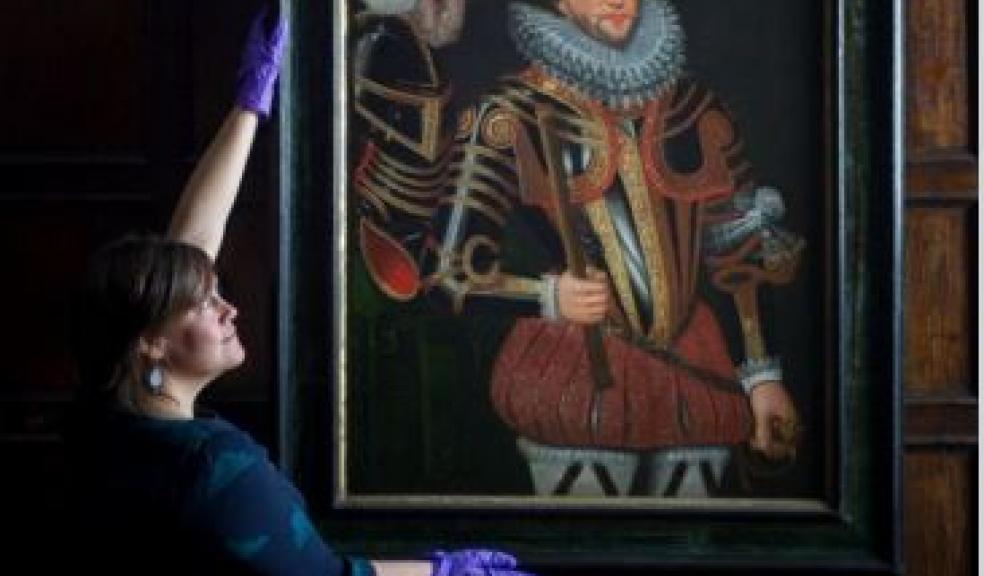 Visitors to Sir Francis Drake’s former home Buckland Abbey in Devon can now see a newly identified portrait of the Elizabethan seafarer on public display for the first time.

The painting, believed to be the earliest likeness of Drake, will be on loan from a private collector, Dirk T. Griffin, for the next 12 months and will be hanging in the Drake Chamber at the National Trust’s Buckland Abbey until early 2017.

Angus Haldane, independent curator and art historian, undertook research in 2014 that led to the discovery that the portrait depicted Sir Francis Drake, by an unknown artist. Mr Haldane suspected it was Drake after noticing physical similarities to other portraits, including his facial warts.

Other physical similarities including hair colour, eyes and physiognomy in known portraits of Sir Francis Drake have helped to confirm Mr Haldane’s research.

Drake is known to have had two warts on the left side and bridge of his nose. These are clearly shown in a number of pictures of him painted during his lifetime including the famous Gheeraerts portrait at the National Maritime Museum and one already on display at Buckland Abbey.

The date of the painting is considered to be mid-1570s, before he circumnavigated the globe for which he was knighted by Elizabeth I. His coat of arms is not shown in the portrait, which suggests that it pre-dates his being awarded such an honour from the Queen in 1581.

Therefore, the picture now on display at Buckland Abbey could be the earliest portrait of Francis Drake.

The portrait also underwent paint analysis, alongside digital X-radiography and digital infrared to help pin point more closely the date of the painting. The style of the armour and its iconography also helps to date the painting and adds to the likely identity of the sitter.

Angus Haldane says “It gives me enormous pleasure to see this portrait of Drake hang on the walls of his family home.  Drake was one of the most important figures of Elizabethan England and it is these art discoveries which keep my appreciation of painting and history ever fresh and exciting”.

Emma Jones, Curator at the National Trust in the South West says “This is not the first time we have displayed an art discovery at Buckland, our visitors will remember the Rembrandt self-portrait that was identified two years ago, so it’s exciting to be able to share another discovery around an iconic figure,

“This striking and colourful painting now has a chance to be seen and enjoyed in the home of Sir Francis Drake himself.  Our visitors can see this new discovery up close as well as other notable pieces in the collection relating to Drake’s life.”

The painting will be on display in the Drake Chamber from the 31st March until early February 2017.