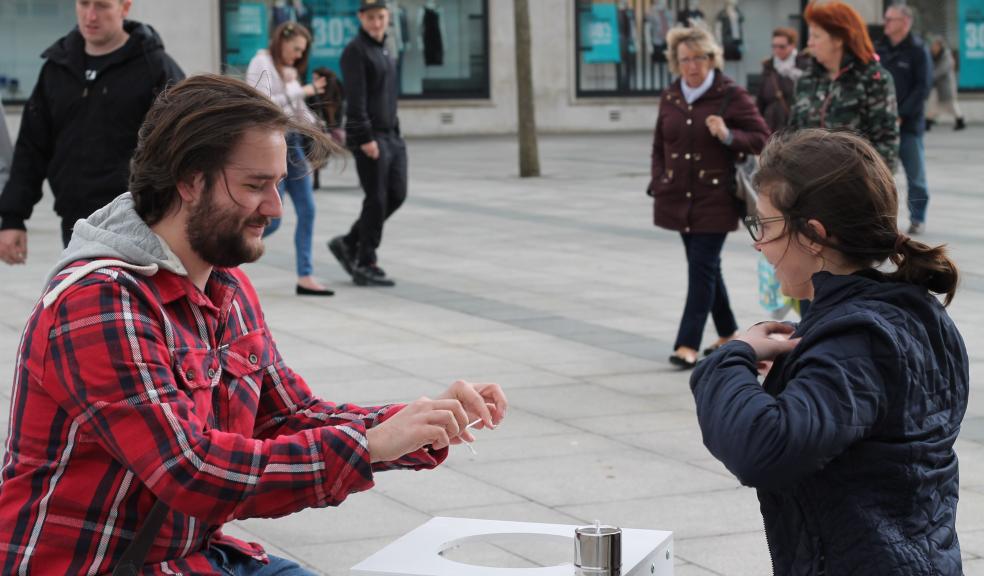 Designed to draw attention to the everyday action of tying a knot and the ways simple things like this can be overlooked, Elena set up a box and two stools beside the sundial in the centre of Plymouth and invited members of the public to sit opposite her and join her in tying knots for as long or as little as they wanted to. Handing people short lengths of string to tie into a knot and drop in the box, Elena has used 120 metres of string by the end of the performance.

Elena Brake said: “I wanted to invite people to tie knots with me and enter a state of mindfulness by asking them to focus on something that they knew how to do, but were not sure when they had learned the skill. By performing in a public space I wanted to create a spectacle that would make passers-by curious and that they would find engaging if they participated. It provoked some really interesting conversations throughout the day with complete strangers.

“I was pleased by how curious and playful some of the people that participated were. It was really interesting talking to some sailors and fishermen, who showed me how to tie knots that I’d never seen before. I even met someone with an interest in Celtic knots and the underground Japanese knot-tying technique of Shibari!

“My art is about everyday objects, actions and moments that are often overlooked. I try to bring these things to the forefront and use techniques such as repetition and time distortion to make them seem strange and unfamiliar, helping the audience to enter a state of mindfulness. I’ve learned so much from my time at Plymouth College of Art. I was really shy when I moved here and audiences terrified me, but my degree has given me confidence and helped me to find my own practice. My work has a really strong focus now and I feel like I know who I am as an artist. I’m really excited now by how rapidly the art scene in Plymouth is expanding and after graduation I want to push forward my career by getting involved in local projects like the Plymouth Art Weekender.”