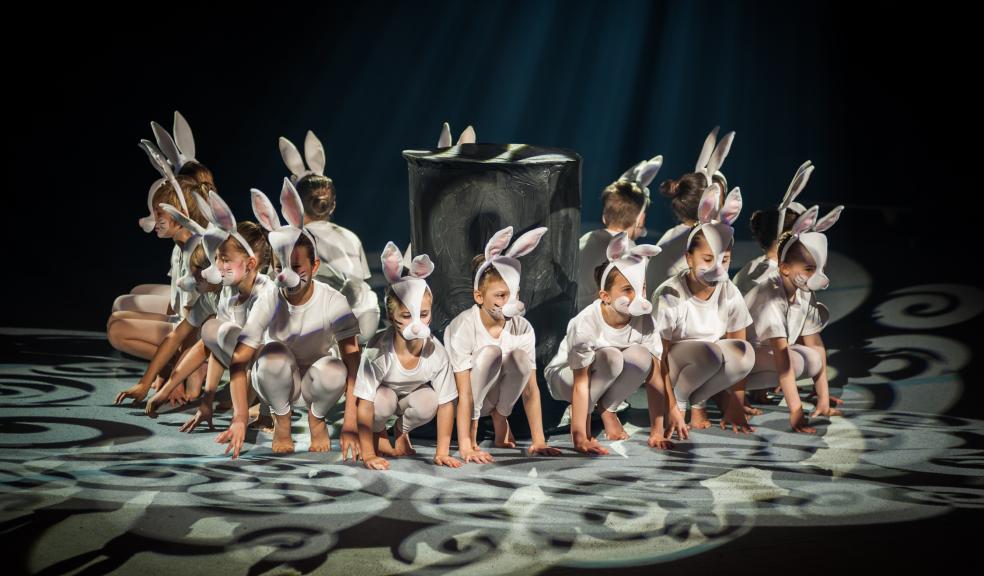 More than 3,000 members of the public were this week wowed by Fantasy – a spectacular three-hour show at Ivybridge Community College – showcasing a magical mixture of the performing arts.

The dazzling event – with performances from gymnasts, dancers, actors and singers – took place in the College’s Sports Hall, which was transformed into a universe of 24 interlinked fantasy worlds.

Featuring a 600-strong cast, aged between seven and 22, the show opened to a dramatic introduction by student and voiceover specialist Tom Jewel, a rendition of 70s classic ‘Land of Fantasy’ by the College’s Soul Funk band, and the first glimpse of central character Poison Ivy (played by Emma Locke) and her four loathsome minions. There were then three hours of acts – containing everything from dragons, angels and fairies to Where’s Wallies, disco divas and Umpa Lumpas.

“It is the best show I have ever seen,” said audience member Lisa Quick, who came to the show with her family. “We’ve travelled more than 60 miles to see the show and we can’t believe how talented and enthusiastic the students are here. It was breath-taking from start to finish, and every act was unique and imaginative.”

Among the acts on show was a new take on the Wizard of Oz, which began with an acoustic version of ‘Somewhere Over the Rainbow’ (guitar played by Johnny White and lyrics sung by Jemima Deboo-Sands), before an army of Dorothies battled with a mass of witches. The piece then fused gymnastics, dance and acrobatics.

Helen Reddy, Head of Performing Arts and the show’s director, said: “It was an amazing spectacle and – despite many tired performers after seven tough shows – it has proven to be another exceptional opportunity for all members of the cast. The Wizard of Oz is just one piece, but it’s a fine example of students of all ages and specialisms working together. We even had our Rugby and Basketball Academy players dressed as scarecrows and lions, dancing and performing in the act.

“This year, a number of former students have come to watch – some of whom have now left University – and they’ve told me that their experience of being in the show is one of their most vivid and special memories from their time at College. Being part of something that is so immense and challenging, yet magical and satisfying, is something that all of the cast will take away with them and remember for the rest of their lives.”

18-year-old Emma Locke – who played the part of Poison Ivy and also performed as an alien, a singer and a disco dancer – hopes to go to musical theatre school in London and eventually star in West End musicals. She said: “What an amazing experience. Being on stage with such good performers gives you so much confidence, and I’ve been overwhelmed by the audience’s positive reactions. It’s an immense feeling of accomplishment when everything comes together so well.”

Gill Taylor, Deputy Principal at Ivybridge Community College, said: "I am probably one of the most ardent fans of dance, gymnastics and musical theatre, therefore I was greatly looking forward to the annual show, entitled the Performing Arts Show - Fantasy. This was the perfect Christmas treat for me, with graceful dancers, precise and powerful gymnasts and wonderful musical theatre. I did not think that the show could surpass the previous year, but it was humorous, highly adventurous and showcased great artistry and our most talented students and pupils in our community, with over 600 people performing. It was sublime!"

The show, now in its eighth year, ran from Wednesday, 11 December to Saturday, 14 December.